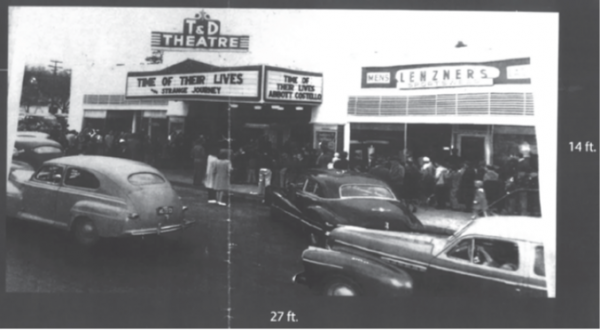 The photo of the T&D Theatre the mural was inspired by.

–The Paso Robles Planning Commission recently approved a new photograph print mural to be installed in downtown Paso Robles. It was proposed by renowned local artist, Steve Kalar, on behalf of the Paso Robles Main Street Association. The mural will be placed on the wall adjacent to the alley of the building, occupied by Paso’s Pizza Kitchen, located at 625 12th Street. It will be a 14-foot by 27-foot black and white photo rendering of the T&D Theater that was once housed in the building. Kalar will be installing the mural.

“The photo mural is part of our program called Celebrating the Arts in Our Community,” says Kalar. “This is a ongoing program and we collaborate with artists, business owners, and building owners to host artwork. The T&D Theatre mural will be the second piece in place, with a few more murals in the works for later this year.”

The first mural is a historical piece celebrating the Blackburn brothers who built the original Paso Robles Inn in the 1800’s. The first mural is located on the side wall behind the gas station located at 12th and Spring streets.

Kalar is a sixth generation San Miguel resident and founded San Miguel’s Masters in Artful Places organization which promotes and educates people about the area’s history and pioneers. Kalar has deep connections to the area.

“For me, to be able to do this mural, is about helping the Paso Robles Downtown Association understand that celebrating the arts in our community exists and is important to us,” says Kalar. “It represents the impact of decisions being made by the community which is important for our community’s evolvement.”

The building’s owner, Philip Cagliero, has entered into an agreement with the Main Street Association who will be responsible for the purchase, installation, and maintenance of the mural throughout its existence. The mural will be visible from 12th Street and Spring Street and will not negatively affect the businesses in the neighborhood. The Paso Robles Planning Commission approved the request to install the mural at a January 10th hearing.

One of many T&D Theatres located in California, the Paso Robles movie house was designed by San Francisco architect Albert H. Larsen and opened in November 1930. It was open until 1955, and demolished in February 1957. The photo, which the mural will be a rendering of, was taken in the 1940’s.

At the time of this publishing, there has been no date set for when the mural will be finished. 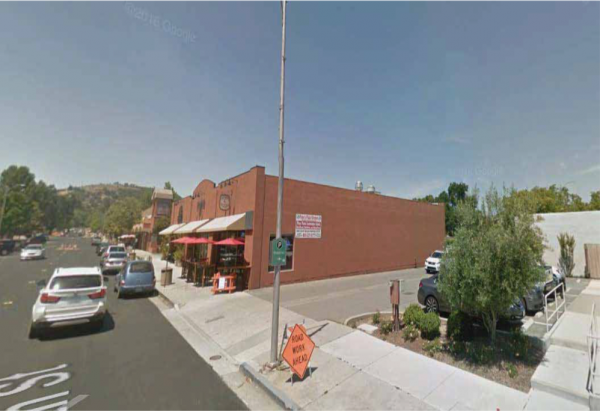 The building where the mural will be placed. This building was where the T&D Theatre was located until it was demolished in February 1957.