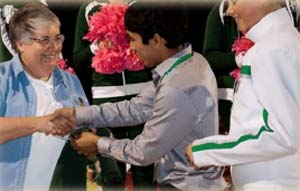 On Oct. 17 Grand Marshal Nanette Fisher, founder of the Soaring Eagle Press, led the Templeton High School Homecoming Parade in style. Nanette’s family moved to the Central Coast shortly after her birth, where her father attended Cal Poly and worked for the railroad. Her mother took care of Nanette along with having a job. They left the area when her father graduated; however, the family ended up coming back to live in Templeton in 1965 and her family has been in the Templeton area ever since.

Nanette spent her last two years of high school at Templeton High, where she was on the newspaper and yearbook staffs, and was homecoming queen her senior year. She recalls riding the bus into school – Highway 46 West had not been built yet – and the road to school was a winding mountain road, but the view was beautiful.

Nanette says that she “remembers so much of what [she] learned [at Templeton], [and] had such great teachers.” One particular teacher who made a huge impact on her life was her journalism teacher, who laid the groundwork for what she believes about journalism: “It is the job of the news press to stand in the gap between the government and the citizens of this great country, holding government accountable, while giving the public the information they need to be informed and actively involved.”

After graduating from Templeton High School in 1967, Nanette went off to college to major in chemistry with a minor in math and physics. She returned to Templeton to help her mother when her father died in 1991. Soon after her return, Nanette became a full-time contributor to the Paso Robles Press and was assigned coverage of the Templeton community and North County water issues. It is here that she realized that Templeton locals had a hard time keeping up with what was going on in their community, considering that articles about Templeton in most papers were past terse and Templeton did not have a paper of its own.

This was the beginning of The Soaring Eagle Press, which turned 14 in June of 2014. It now reaches about 2,000 readers and is still run by a staff of one, Nanette herself, who has committed to taking it through its 20th year. The mission of The Soaring Eagle Press is “first and foremost to let people know what’s coming up so that they can get involved in their community. Secondly, to highlight our youth’s achievements, because they are both the focus and the future of our community. And finally, to deal with the adult shenanigans when there is time and space.” When told she would be the Grand Marshal of the Templeton Homecoming Parade

Nanette was speechless. All she could think was “How am I going to cover the parade?” However, she seemed to be fine at doing just that, snapping pictures from the car she was riding in while waving at the viewers. Nanette asked her mother to ride with her in the parade, because she has been her biggest supporter. When everybody else was telling her it couldn’t be done, her mother was cheering her on.

“I’ve always said that at the end of my life, if I have achieved even half as much as my mother, I will have lived a very good life,” stated Nanette. When asked why she’s a journalist she shared, “I’m curious about everything, and I get bored easily. Journalism allows me to learn about so many different things
and people, it is never boring.” Nanette will continue to make an impact on the Templeton community and keep it updated.

“I was humbled and deeply touched by this honor – it is an incredible distinction to be recognized in this way by a school and community that I love,” Fisher