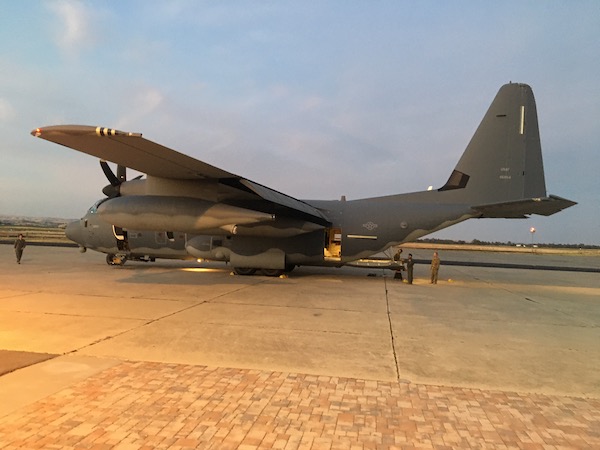 The guard was sent on here on orders from Gov. Gavin Newsom, he said. “At the time… there are no requests for support to Paso Robles law enforcement. The situation is very dynamic.”

“Gov. Newsom and The Adjutant General’s goals are to support requests by local leaders to assist them in protecting lives and property,” Maj. Redmond said. The soldiers are trained in riot control. If deployed to assist law enforcement, soldiers would be armed during civil unrest duties,” he said.

“We would like to thank the members of the Paso Robles community for their support,” he said. “As a former military pilot, I am aware of the noise our aircraft generate. Thank you for understanding our need to move members in and out of your community so we can safely protect the lives and property of our California neighbors.”

Joe Ontiveros says he had a busy night at the Joe’s One-Niner Diner at the Paso Robles airport. He worked until 9 p.m., seven hours after closing time. They served hot dinners to the troops when they arrived, otherwise, they would have been limited to cold MRE dinners.

Joe’s Place fed all 400 troops including Tech Sergeant Andy Ontiveros, who is Joe’s son. Andy is a C-130 Loadmaster. He brought two flights into Paso Robles, where he still lives.