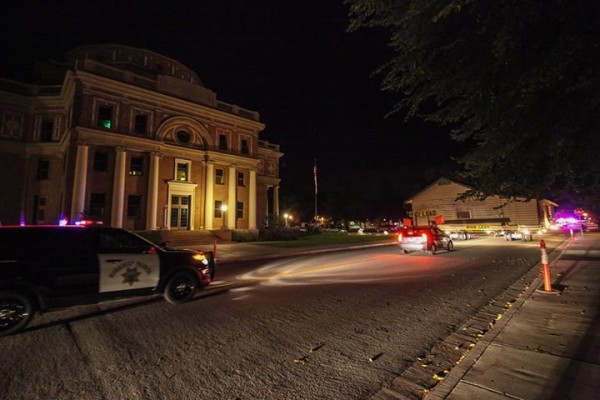 Structure to be part of historical society heritage center

– An unusual sight met passersby in downtown Atascadero around 10 p.m. last Monday — that’s when a nearly century-old cabin traveled one mile from the grounds of the Atascadero Junior High School to a piece of land near the Atascadero Library on Capistrano Avenue.

“We’re all so thrilled it is relocated,” said Brenda Nicovich, a board member for the Atascadero Historical Society. “Most of the credit goes to our president, Jim Wilkins, and Irene Bishop — she did most of the paperwork.”

It was indeed the quick action of Wilkins, accompanied by Bishop’s attention to detail, that made the move happen when the opportunity dropped in their laps.

During a construction project at the junior high school, it was decided to put in an access road on the property. The only drawback was that it would mean the historic cabin would need to go. The school district contacted the historical society, which decided the cabin would fit well with its plan to build a heritage center at the library site on Capistrano Avenue. Time was short though, so the society had to work fast. There was money to raise — reserves were used that now must be replenished; permits were acquired, and help was received from several agencies who all contributed to the move.

“The cabin went up West Mall, turned onto El Camino then up Highway 41,” said longtime docent Len Johnson, who was on the scene. “It was remarkable to watch.”

The historical society had to deal with several government agencies to acquire permits and secure help in the move itself. CalTrans and the City of Atascadero rushed permits; the California Highway Patrol escorted the move; and the Atascadero Police Department cleared the path by making sure the roadway was free of vehicles.

“There were no glitches at all; the whole move took around an hour,” said Atascadero Police Commander Joe Allen. 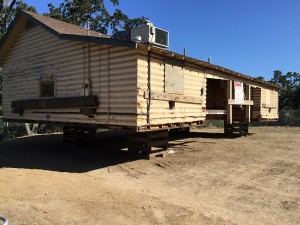 This historic cabin sits on blocks at its new home on Capistrano Avenue in Atascadero. It will be a part of a cultural heritage center. Photo by Paula McCambridge

The cabin’s date of construction is unknown, but it is estimated to have been built in the 1920s or 1930s.

“It’s been used by Boy Scouts, Cub Scouts, Girl Scouts and other children’s activities until the early 80s when the school district turned it into offices,” Johnson said. “Now it will be a museum.”

The Capistrano property is slated to become a cultural heritage center, and the cabin will likely become the natural-history museum, one of four buildings at the site, said historical society president Jim Wilkins.

The historical society is raising funds for the heritage center, accepting donations and applying for grants.