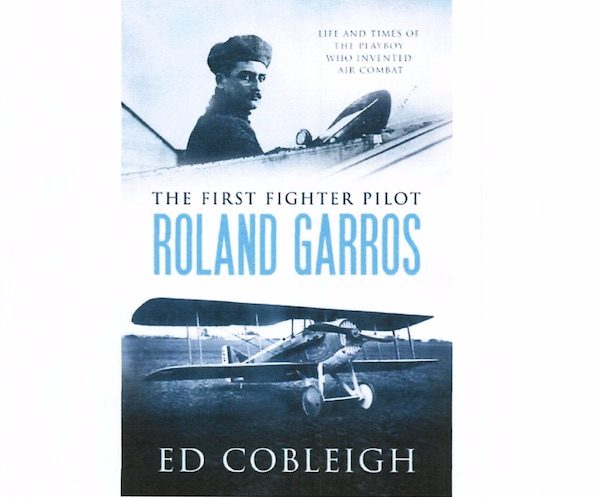 –Roland Garros led an adventurous life – one recounted in a new book from the pen of veteran fighter pilot and North County author Ed Cobleigh, ranked the #1 new release of WWI biographies by Amazon.com.

Garros was a world-class athlete, a lawyer, a sports car salesperson, a classical pianist, an air racer, a pioneer aviator, and an escaped prisoner of war. He taught himself to fly in a bamboo airplane and introduced heavier-than-air flight to crowds in the United States and Latin America.

“Garros was the first pilot to fly across the Mediterranean and set numerous aviation records,” Cobleigh said. “He abandoned the sensualist life of a ‘Boulevardier’ in Paris, leaving behind his lover, to fly and fight in the lethal skies of the Great War.”

In early 1915, Garros built and flew the world’s first fighter plane. Never before had a lone pilot hunted down other airmen. Overnight, air above the battlefield became a lethal combat zone. Warfare would never be the same again and neither would Roland Garros.

A narrative nonfiction biography, “The First Fighter Pilot — Roland Garros: The Life and Times of the Playboy Who Invented Air Combat” is now in print and available as an eBook, soft cover, or hardcover. Bestselling author Ed Cobleigh used his experience as a top gun fighter pilot and the unique set of skills he acquired as an intelligence officer to bring Roland Garros’ fascinating story to life.

The book places Garros in his times in turn-of-the 20th century history. The development of early aircraft, life in “La Belle Epoque,” pioneering airshows, and dangerous air races provide colorful descriptions. Building on interest in WWI on the centenary of the Armistice and using Garros’ life as a vehicle, Cobleigh describes the pilot’s descent from the “Gilded Age” into the man-made hell of the Great War. Roland Garros, his squadron mates, and his airborne enemies set the stage for the aerial battles to follow in WWII.