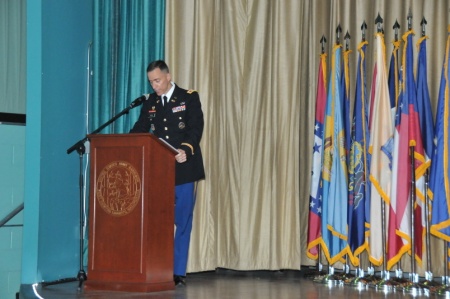 “It’s a great honor and privilege to serve as the commander of Fort Hunter Liggett, said Norris. “I look forward to being a part of the Hunter Liggett team and the greater community to help make this facility a better place for Soldiers, families and civilians to train, work and live.”

Norris hails from Richmond, Va., and has 21 years of military service. His previous assignment was as a staff officer on the Joint Staff J6 at the Pentagon. Prior to the Pentagon, he served as the commander of the 4th Joint Communications Squadron (Airborne)-Joint Communications Support Element, MacDill AFB in Tampa, Fla.; and as the assistant chief of Staff, G6 for the 311th Sustainment Command (Expeditionary) in Los Angeles, Calif. He served in Hawaii from 2007-2010 in various key positions as S3-516th Signal Brigade, S3-30th Signal Battalion and Chief of Current Operations for the 311th Signal Command (Theater) at Fort Shafter. His most recent deployment was as Chief, Current Operations for the 335th Signal Command Forward at Camp Arifjan, Kuwait, in 2009.

Fort Hunter Liggett provides base operations support enabling world-class military training while providing for the well-being and security of Soldiers, family members and civilians on post. It is the eighth largest Army installation and the largest Army Reserve installation in the country.