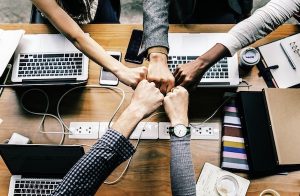 –Citing a slew of looming economic challenges, a broad-based coalition of regional business and civic leaders on Monday announced the creation of a new organization that will unify the “Central Coast Super Region” – from Vandenberg to Camp Roberts – to forge a stronger, more resilient regional economy.

At the invitation of the Central Coast Coalition of Chambers, more than 150 regional leaders came together to learn about the Hourglass Project, a proposal to create a new organization aimed at strengthening the local economy based on Regionalism, a concept of collaboration that has helped other U.S. communities overcome shared challenges they could not solve on their own.

Headlining the event was Tom Clark, who is often referred to as the “Godfather of Regionalism.” He is widely recognized in Colorado for his leadership in transforming the Metro Denver area from a culture of competition to a culture of collaboration, resulting in the region’s sustained economic success over the past three decades. Leaders from across the Central Coast have studied Clark’s work and the resulting economic growth, and as a result, urged adoption of the Regionalism playbook for the Central Coast.

MindBody CEO Rick Stollmeyer, speaking on behalf of the Hourglass Champions, said: “Each of our individual communities faces difficult economic and social challenges, many of them common to all of us, but too difficult to solve within our individual local communities. What we need is the collaborative leadership and capacity to drive bold actions by leveraging the strengths and assets that exist across our region.”

“If we want a truly prosperous and inclusive society, we need to think and act as what we really are, a region of nearly half a million people,” Stollmeyer said. “That kind of scale can generate a lot of creative resources, and speak with greater influence in Sacramento and Washington.” Stollmeyer is co-founder and CEO of MindBody, a global employer with offices in San Luis Obispo and Santa Maria with more than 1,000 Central Coast employees.

The Central Coast Super Region – the area stretching from Vandenberg Air Force Base north to Camp Roberts – includes 10 cities, 2 counties and dozens of unincorporated communities and service districts and a population of nearly half a million people.

“Our economic development efforts need to take into account the way people actually live their lives,” said Tony Guy, Executive Vice President and Santa Maria General Manager of Zodiac Aerospace. “So many of us wake up in one community, work in another and dine, shop and play all over the Central Coast. Our businesses behave the same way. They are interdependent on suppliers and customers who work and live across a wide geography and multiple city limits. By leveraging our collective strengths and resources, we have a much better shot at solving shared challenges and creating more opportunity for our communities and all our residents.”

Cattle rancher Dee Lacey of Paso Robles-based Lacey Livestock echoed those sentiments: “While each of our Central Coast communities is unique and distinctive, they are much more interconnected than we have fully appreciated. Judging by the heartening fact that so many people from the diverse segments of our respective communities are coming together to support the concept of Regionalism, it’s clear that there is a strong need for greater collaboration focused on sustaining a high quality of life for the next generation.”

Carbajal said: “The scale and complex nature of our economic challenges on the Central Coast suggest that we can’t simply do more of the same. We must step outside of our political and regional silos and coordinate to create good jobs with family-sustaining wages and, ultimately, greater prosperity for all residents.”

Cunningham said: “The passage of SB 1090 shows that San Luis Obispo County is stronger when it is unified behind a common goal,” said Cunningham. “The Hourglass Project solidifies a region-wide coalition formed to support the Diablo Canyon closure mitigation measures, and will help build a stronger, more resilient Central Coast economy.”

Melissa James, of the SLO Chamber speaking on behalf of the Hourglass Project Working Group, explained the origin of the Hourglass name: “We adopted the name ‘Hourglass Project’ temporarily because we felt a sense of urgency about the need for greater economic opportunities for our region’s residents,” James said outlining the reasons that a new approach to economic development is needed. “To put it simply, we need to change course if want our kids to have the opportunity to live, work and raise a family here.”

Research done by the Hourglass Working Group, and reported to the attendees Monday, demonstrated that the Central Coast is underperforming compared to its peers, and has been for at least two decades. Moreover, high housing costs are over-stressing the workforce and contributing to the ongoing exodus of the middle class with young families believing the American dream is out of reach.

The report noted that the region will lose a key segment of the local jobs base with the closure of Diablo Canyon Power Plant, plus automation is projected to negatively affect 30 percent of the workforce in the next 5 to 10 years.

The Hourglass Project Working Group came together at the behest of Cal Poly President Jeffrey Armstrong, who was interested in finding ways for Cal Poly to be a helpful partner in economic development.

“I couldn’t agree more with the Hourglass findings. Bold action is what we need today to be on a better path tomorrow,” Armstrong said. “The time to act is now — and we need to do it together.”

The goal of the Hourglass Project is to foster a collaborative, all-hands, action-oriented approach to building a more resilient economy for the Central Coast Super Region, from Vandenberg to Camp Roberts.