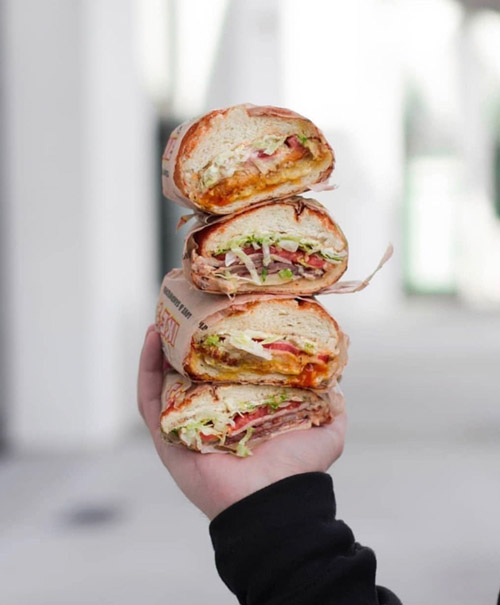 –Ike’s Love & Sandwiches has officially opened its doors in North County, the company announced in a news release Tuesday. “We are currently softly open to the public and holding an official grand opening celebration on the 17th,” says spokesperson Caitlin Corbin.

June 15 will kick off a weeklong celebration at Ike’s, including a fundraiser before the official grand opening party. The events will be hosted by the sandwich wizard himself, Ike Shehadeh, company founder and the face behind the brand.

The fundraiser is for the Templeton Recreation Foundation and will be held on Tuesday, June 15, from 5–9:30 p.m.  All sales from in-store orders that evening will go to the nonprofit, which helps promote health for Templeton residents through recreational experiences and activities.

The main grand opening event is on Thursday, June 17. The first 50 people in line will receive a free sandwich of choice, an exclusive Ike’s Templeton T-shirt, and be entered in a raffle to win free sandwiches for a year.  Throughout the day, sandwiches will be available for $6 each, with a limit of two per order. Shehadeh will be onsite for a meet and greet and for photos against the new “Ike’s Loves Templeton” mural.

The sandwich shop is now open at 1121 Rossi Rd, Unit B, in Templeton. Hours of operation are 10 a.m.–9:30 p.m. daily.  Ike’s is currently looking for more staff to join the Templeton team. For more information and to apply, visit the company’s job site linked here.

Every new Ike’s location offers a set of exclusive sandwiches named after local icons and only available at select locations. Ike’s Templeton exclusives are “Brand Walsh,” a steak sandwich with garlicky tomato pesto and provolone, as well as a vegetarian version titled “Laff Box” made with breaded eggplant in place of steak.

This is Ike’s second location in San Luis Obispo County and the 75th store in the chain. Ike’s is a growing brand, with additional California locations set to open over the next three months in Carson, Marina Del Rey, Hollywood, and Manhattan Beach.

The brand first exploded onto the San Francisco food scene in 2007 as a small sandwich shop under the name “Ike’s Place.” An original since day one, the brand has been defined by innovative offerings and iconic flavors. Dutch Crunch bread with Ike’s Dirty Sauce is a duo unlike any other, the company’s news release says. There are over 800 original sandwiches on the menu, including vegan, vegetarian and gluten-free styles. Ike’s is located across California, Texas, Nevada, Arizona, and Florida.