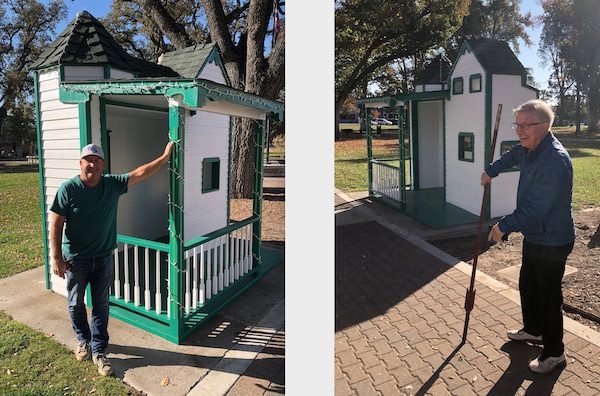 –A new Santa’s house went up in the Paso Robles Downtown City Park Sunday morning. The old house used by Main Street for events in the downtown suffered from years of use, and being subjected to irrigation when the sprinklers were running.

City Councilman Steve Gregory said, “Brett actually built the original Santa’s House house 23 years ago. Over the years, as it lost its luster, Brett came up with the idea to build a new structure that looks like Norma Moy’s house. It’s in honor of Norma’s service to the community.”

Brett Butterfield said, “We learned from talking with the guys from Main Street who maintained it and learned of some of the problems they had. We put it on solar and an automatic timer, so the lights just come on in the evening. We don’t have to use power. The house is made out of a lot of water-proof siding because the watering caused the previous house to experience rot.” 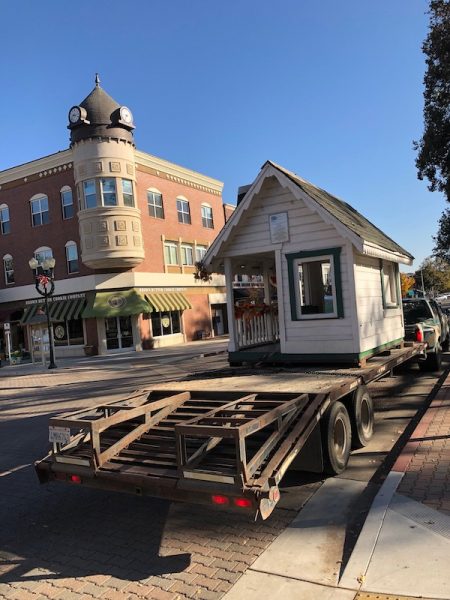 The old house was removed on a flatbed truck.

The new truck stands in its place at the corner of Park and 12th Street in the Paso Robles Downtown City Park.

Santa’s wife arrives on Friday to turn on the holiday lights in the downtown city park. She will also inspect the new Santa’s house Brett Butterfield built.