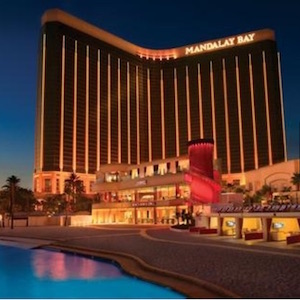 Gunman Paddock, shooting from the 32nd floor of the Mandalay hotel suite, killed 58 concert-goers and sent more than 500 to the hospital before killing himself.

–Amanda Bean, a Paso Robles resident, was one of the thousands of fans attending the Route 91 Harvest Festival Sunday night in Las Vegas. Instead of enjoying the music and good times, Bean and a companion, Erika Taylor, found themselves running for their lives, according to a New Times report on Thursday,

Sunday night, 65-year old Stephen Paddock fired high-powered weapons from a 32nd floor suite of the Mandalay Bay Resort and Casino on the concert crowd, killing 58 and wounding over 500 before killing himself.

The New Times reports: “Bean said she and Taylor were forced to duck behind a metal barrier between the crowd and the front of the stage. Between volleys of gunfire, she said a group of people was helping others escape over the barrier. Taylor went over first, but Bean was unable to follow after her because the shooting had started again. She was finally helped over the barrier and began crawling under the stage. Under the stage Bean said she called her mother before hanging up and trying to find her friend.”

Bean and Taylor were able to find one another, found a ride and spend the night at a friend’s house for the night. Bean credits the heroism of those at the concert who risked their own lives to help her and Taylor to safety. “They were literally the reason we got out of there. They put their lives on the line,” Bean reportedly told the New Times. “Even though this horrible thing happened, there was still good in people who were willing to put others before themselves.”

Since the shooting, memorial vigils have been held in various places in the Central Coast. Women’s March SLO has scheduled a vigil for 7 p.m. Oct 14 at Mission Plaza in San Luis Obispo.

Authorities are still investigating and following Paddock’s movements leading up to the shooting. According to a 10:30 a.m. CBS News report, authorities have said that “Paddock booked rooms over other music festivals in the months before opening fire on the Route 91 Harvest Music Festival.”