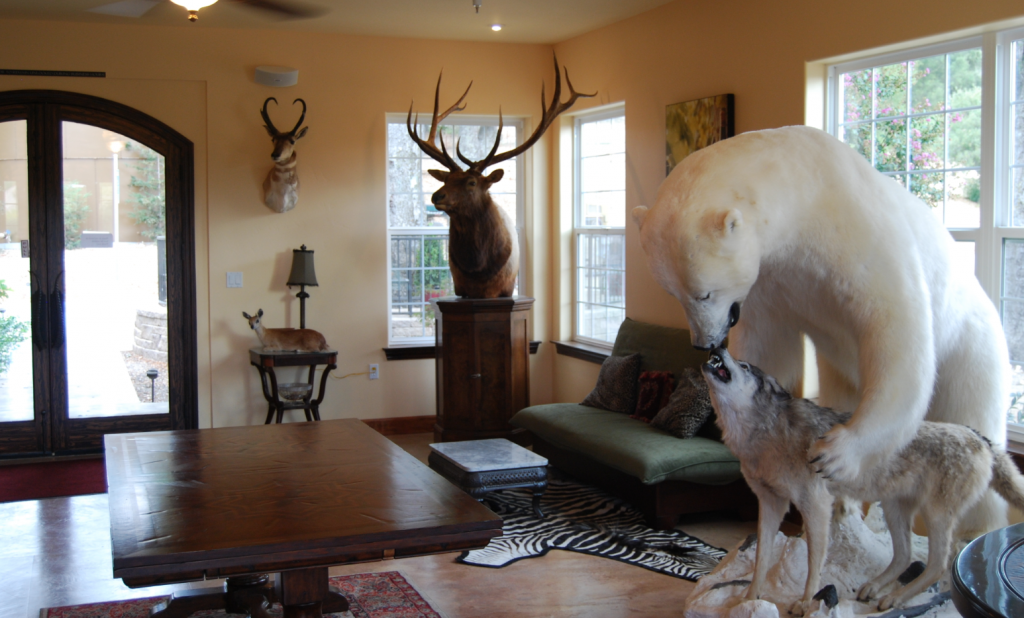 Where the wild things are

Walking into the tasting room tranquility transforms into wonder. Eyes are immediately drawn to the room’s huge trophy elk, antelope, Siberian lynx, and most of all, a ten foot polar bear towering on its hind legs above a wolf. This is where the wild things are. The decor, staff, and wine invite you to indulge into the raw and wild.

Upon shaking owner Michael Gill’s calloused hands, you don’t expect these to be hands of a dentist. Growing up in the oil fields of Taft, Gill was first introduced to fine wines during his postgraduate years in dental school. His best friend’s parents were professional photographers, and were hired to create and photograph extravagant displays of fine wine, cheeses, and food. The fate of these displays were at the mercy of Michael and his friends’ appetites, which would act as the initial catalyst of his taste for fine wine.

““My day job is a dentist, you have to make every job perfect, and that’s how I’m approaching all of this.”

In the early 1970’s Gill began his own practice as a dentist in Bakersfield. In 1977 during his weekend retreats to the Central Coast, Gill visited a barren 25 acres for sale in Peachy Canyon. He remarked at the time he had little intuition of the potential the property had for growing grapes. However his friend Robert Nadeau recognized its potential, and helped lay out the grid work for vineyards in 1998.

“Rolling hills, deep valleys, dynamite combination of soil, and 50 degree temperature swings is a premier example of what Paso Robles can do with Rhone wines,” remarked Gill.

The full time dentist and part time viticulturist initially grew grapes and sold them to neighboring wineries. However in the last four years Gill ceased selling grapes, and focused his efforts into fine wine production.

Upon closer examination of the tasting room, the vineyards, and most of all the wine, it’s evident that perfection is commonplace at Michael Gill Cellars.

“My day job is a dentist, you have to make every job perfect, and that’s how I’m approaching all of this,” he says.

Producing up to 1,000 cases when in full production, Gill wants to stay at a smaller scale to keep as much consistency, control, and excellence in the wine as possible. With just him and his wife Shelley commanding every aspect of wine production from growing grapes to bottling, it’s an impressive operation.

“We let the grapes talk to us; we do what the vines tell us to do to make them perform the best. We’re not trying to mass produce everything, get on a treadmill, and be married to budget and expectations. If one grape takes extra care, it gets extra care; we make the time,” says Gill.

The dentist isn’t kidding around. Gill Cellars uses only their home grown grapes, and doesn’t sell any of them.

“People go crazy over the Syrah,” he says. “Presently we’re only pouring two wines, the syrah and viognier. It makes converts out of red wine-onlys and white wine-onlys.”

Small, personalized, and having only had the tasting room open since March, Michael Gill Cellars hasn’t had time to submit his wines for awards yet. Instead his wines are getting around mostly by word of mouth. He’s had some people come back four times and buy heavily.

Gill couldn’t stop talking about his syrah, and it was evident why. The 2008 Double Rings Syrah (70 cases) and 2009 Black Tie Cellars Syrah (58 cases) are some of the darkest in the county. Rich aromas of blackberry, licorice, cassis, and stone pebble bleeds like silk as you take your first sip of the Double Rings.

Both syrahs glide down like smooth butter, especially after they’ve had a chance to open up. Gill Cellars recommend pairing their syrahs with roasted meats, wild game, roasted vegetables, and robust seafood dishes.

“The wine is poured as a debutante, and finishes as the grande dame,” smiles Gill.

The wine labels were all designed surrounding Michael and Shelley’s wedding. The 2009 Shelley’s Surprise Viognier really was in fact, Shelley’s engagement surprise.

This is where the wild things are. Rich, full syrahs accompanied by the extensive collection of stuffed trophy game and Gill’s hunting stories across the globe isn’t your traditional wine tasting.

The shaded patio overlooking contorted valleys and hills requests you abandon your wireless technology, and instead indulge in a full symphony of senses: the aesthetics of the landscape and tasting room, the sound of the Pacific’s breeze seeping through the hills, and the taste of fine, handcrafted wines beckoning a sense of solitude and reflection.

Michael Gill Cellars is located at 4125 Peachy Canyon Road in Paso Robles. Tasting room hours are Saturday through Sunday 11pm to 5pm. For more information visit their website michaelgillcellars.com or call (805) 239-1668. To see what others are saying about Michael Gill Cellars you can find them on Facebook.