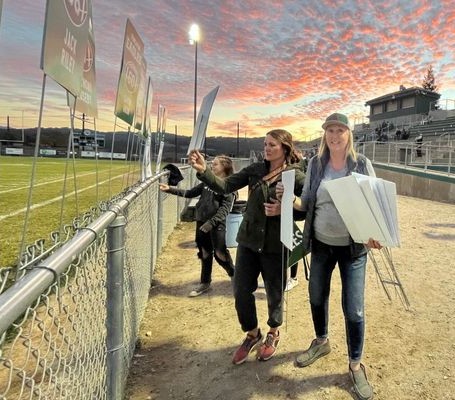 Templeton Coach Don Crow says this is the most important game of the year for his team. It’s not only a CIF Semi-final game, but it’s a rematch with #8 Pioneer Valley, which beat the #4 Eagles, 28-21, last month in Templeton. Pioneer Valley upset undefeated #1 Bishop last Friday night, 9-7, to advance to the semi-final. The Eagles beat Corcoran 21-17. Coach Crow says the Eagles are going to have to play well tonight against the Panthers.

“This team beat us on Senior Night on our home field,” said Crow, “Unquestionably, we’ll have to play our best game of the year.”

Atascadero (#2) will host #3 Dos Palos tonight. Last Friday, Dos Palos (7-5) beat Morro Bay 28-27 in the valley. Meanwhile, Atascadero (7-4) beat Madera South 39-8 at home. The Greyhounds lost the first three games of this season, then won seven of their last eight games. The only team to beat them was Pioneer Valley. The Panthers beat them 21-20 in Santa Maria in the Greyhounds’ final game of the regular season.

If the Greyhounds win, the CIF Division V Championship game will feature two Ocean League teams, Atascadero and either Templeton or Pioneer Valley of Santa Maria.

In Division III, #1 seeded Mission College Prep will host #4 Kennedy of Fresno in the semifinals.