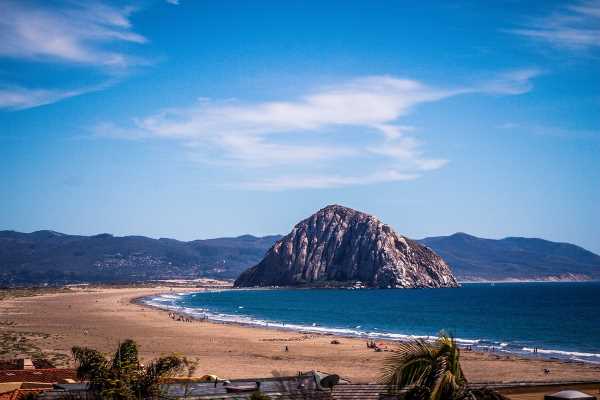 Approximately 40-percent of Lisamu’ (Morro Rock) was mined to build the breakwaters in Port San Luis and Morro Bay as well as buildings throughout San Luis Obispo County.

– The Northern Chumash Tribal Council will hold a private ceremony on Saturday to commemorate the return of stones from the Chumash sacred site of Lisamu’, commonly known as Morro Rock, that were mined more than 120 years ago.

“Lisamu’ has been a place of spiritual significance for the Chumash for thousands of years, bringing life and food for our people,” said Violet Sage Walker, Northern Chumash Tribal Council Chairwoman. “The reunification of Lisamu’ represents a healing of our people and our culture – a healing that is long overdue.”

The return of the stones are a part of the U.S. Army Corps of Engineers project to repair the Port San Luis breakwater, which was built using stones mined from Lisamu’. The Army Corps will be using reclaimed stones from the breakwater to form an underwater seamount 150 yards west of Lisamu’. Lisamu’ was used as a rock quarry in 1889 and defaced by high explosive charges. Approximately 40-percent of Lisamu’ was mined to build the breakwaters in Port San Luis and Morro Bay as well as buildings throughout San Luis Obispo County.

“The return of stones taken from Lisamu’ represents a healing of our people and our culture – a healing that is long overdue,” said Violet Sage Walker, Northern Chumash Tribal Council Chairwoman.

The Army Corps first reached out to Northern Chumash Tribal Administrator Fred Collins to consult on the breakwater repair project in 2017. At Fred’s request, the Army Corps agreed to return the reclaimed stones to Lisamu’.

“When the Army Corps first reached out to Fred asking how they should handle these sacred rocks, he told them to bring them back to Lisamu’,” said Sage Walker. “They took his request seriously, and ultimately determined that they could bring the stones back to Morro Bay.

“Fred spent most of his life trying to protect Lisamu’. This project wouldn’t have happened without him.”

Fred passed into spirit last October, leaving Sage Walker to assume the role of chair and consultant on the project. The breakwater repair project began earlier this year and is expected to last into 2023.

Saturday’s event will be held at the base of Lisamu’ and will include a tomol landing (traditional Chumash canoes) and ceremony to bless the stones that are being returned. The event will also feature remarks from Chairwoman Violet Sage Walker, Coastal Band of the Chumash Nation Chairwoman Mia Lopez, U.S. Army Colonel Julie A. Balten, Hispanic Access Foundation President Maite Arce, and representatives from the City of Morro Bay.