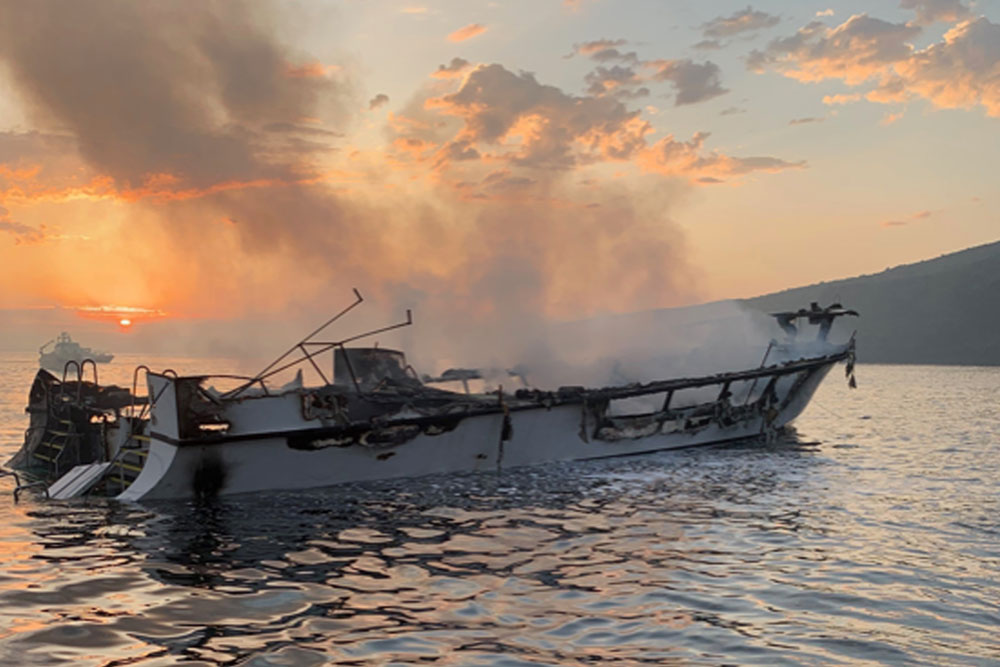 – In September of last year, 34 people died when the worst maritime disaster in California history occurred the night the Conception dive boat caught fire and sank off the Central Coast. Yesterday, the National Transportation Safety Board released the findings of its year-long investigation.

Safety issues identified by NTSB in the accident

About 3:14 a.m. Pacific daylight time on September 2, 2019, the US Coast Guard received a distress call from the Conception, a 75-foot-long small passenger vessel operated by Truth Aquatics, Inc. The vessel was anchored in Platts Harbor on the north side of Santa Cruz Island, 21.5 nautical miles south-southwest of Santa Barbara, California, when it caught fire. When the fire started, 5 crewmembers were asleep in their bunks in the crew berthing on the upper deck, and 1 crewmember and all 33 passengers were asleep in the bunkroom below. A crewmember sleeping in an upper deck berth was awakened by a noise and got up to investigate. He saw a “glow” outside. Realizing that there was a fire rising up from the salon compartment directly below, the crewmember alerted the four other crew members sleeping on the upper deck.

The captain was able to radio a quick distress message to the Coast Guard. Crewmembers jumped down to the main deck and attempted to access the salon to assist the passengers and crewmember in a bunkroom below the main deck but were blocked by fire and overwhelmed by thick smoke. The five surviving crewmembers jumped overboard. Two crewmembers swam to the stern, re-boarded the vessel, and found the access to the salon through the aft corridor was also blocked by fire, so, along with the captain who also had swum to the stern, they launched the vessel’s skiff and picked up the remaining two crewmembers in the water. The crew transferred to a recreational vessel anchored nearby where the captain continued to radio for help, while two crew members returned to the waters around the burning Conception to search for possible survivors.

The Coast Guard and other first responder boats began arriving on scene at 4:27 a.m. Despite firefighting and search and rescue efforts, the vessel burned to the waterline and sank just after daybreak, and no survivors were found. Thirty-three passengers and one crewmember died. The surviving crew were transported to shore, and two were treated for injuries. Loss of the vessel was estimated at $1.4 million.

“This bill addresses many of the shortcomings uncovered in the NTSB’s investigation and reflected in their findings,” Carbajal says. “The bill requires interconnected fire detection equipment and two different means of escape, calls for the use of monitoring devices to ensure a roving patrol is awake, and directs the Coast Guard to create and adhere to safety rules around flammable items like lithium batteries.”

“The NTSB’s investigation and findings underscore the critical importance of passing this legislation and ensuring the Coast Guard enforce existing and updated safety regulations. I am hopeful that this bill will be signed into law so we can honor the memory of the 34 lives lost by working to make sure a tragedy like this never happens again.”

Read the executive summary of the NTSB report here