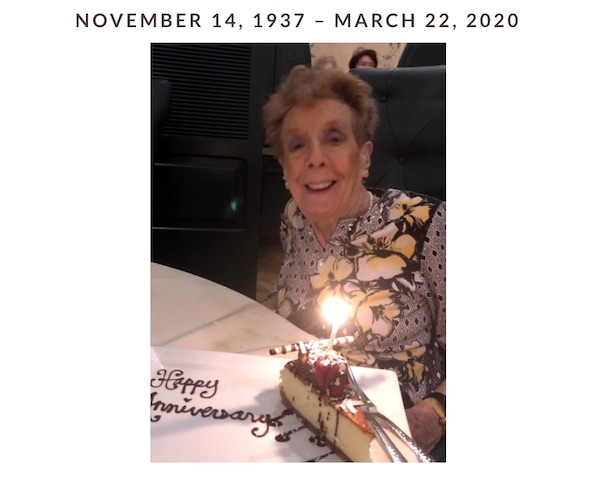 –Alice “Florence” McConnell, 82, long-time resident of Paso Robles passed away peacefully on Sunday, March 22, 2020, in Hanford, California. One of five children, Flo was born in Portobello, Scotland to Faber and Alice Dewar. After marrying Robert “Scotty” McConnell in 1957, the two immigrated to the United States of America in 1962. Six years after being in the United States, Flo and Scotty were blessed with their daughter Karen. In 1969, both Flo and Scotty became American citizens.

In 1969, they moved to Paso Robles, which she always referred to as home. Anyone who banked at Crocker Bank in Paso knew Flo. She worked as a bank secretary at Crocker for many years, developing friendships with co-workers and bank customers. Flo enjoyed supporting the Bearcats, traveling all over the state to watch her daughter in both high school and college sports. Flo and Scotty moved to Hanford, Ca in 1999 to be closer to their daughter. Although she treasured being close to Karen and spending time with Karen and her activities, Flo always felt Paso Robles was “home”.

Flo shared 60 wonderful, happy and memorable years of marriage with Scotty. She will always be remembered for her warmth, kindness and generosity of heart. Flo never met a stranger and always made time for anyone who needed her ear or advice. She loved traveling to multiple countries, arts and crafts, her friends from Beta Sigma Phi and her home church, Plymouth Congregational Church in Paso Robles. After a long battle with Parkinson’s, Flo spent her final months at home with her daughter and Lupe, as her faithful companion, always tending to her every need. This allowed her to spend her final weeks without suffering and pain and she can now rest with her heavenly father for eternity. Together again, she has been reunited with her parents and siblings Faber, James and Sylvia.

Flo is survived by her husband Scotty and daughter Karen of Hanford, her sister (Margaret Findlay of Santa Barbara, Ca), her brother-in-law (Thomas McConnell of Musselburgh, Scotland) and many nieces and nephews and very special friends, all of who will miss her greatly.

A heartfelt thank you to Valley Christian Home in Hanford, Optimal Hospice, Lupe Castaneda and many friends and family for your continued prayers and support.

Private service will be held at a later date.