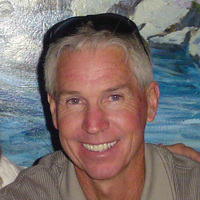 Dan lived in the North County for over 32 years

– Dan Bergin, 63, passed away on Oct. 26, 2021 after a courageous 3-year battle with Amyloidosis, a rare blood disorder which caused Congestive Heart Failure. Dan lived in the North County for over 32 years. The Bergin family had a vacation home at Lake Nacimiento, in Oak Shores, beginning in the late 1980’s. He was born in Santa Monica, Calif and had lived in the San Fernando Valley prior to making his home in Paso Robles.

After relocating to the central coast, Dan owned and operated Bergin Heating & A/C for 44 years, first as a partner with his father John, aka “Berg”, and later as sole proprietor, after Berg’s retirement in 1998. Dan had a great working alliance with some of the best contractors in the North County and established many amazing friendships along the way.

Dan was a wonderful husband and father. He doted over his family and was a source of positivity and support for everyone around him. Dan is survived by his wife, Cindy (of 32 years), daughter, Kimberly, mother, Grace, brothers, Mike (Davina), Tom (Cynthia), along with many Nephews and Nieces that adored their Uncle Dan. Dan was predeceased by his father, John “Berg” Bergin who passed away in 2019.

Dan had a smile that would fill the room, and had the kindest soul of anyone you would ever meet. He was an avid golfer, and was often referred to as “Steady Eddy”, a nickname attributed to his smooth golf swing. The first of his biggest accomplishments was getting his daughter, Kimberly, involved in golf. “Builds character”, he would say. His second biggest accomplishment was his return to the game after his diagnosis. Perhaps not the same as walking 36 holes like he used to, but he truly enjoyed the ride. He especially enjoyed the camaraderie of the Wednesday golf group, with a few wagers in play, and the rounds he spent with his daughter, bonding and enjoying their favorite pastime together. Dan golfed in Cabo the last week in August and shot a clean 84, not bad for his last round on an unknown course with unfamiliar clubs. Upon finishing he said, “The Golf Gods were shining.”

Dan always had great appreciation for the simple pleasures in life, a trip to the beach or a photo of the sunset would simply make his day. His joy and spirit for life will be sorely missed. In lieu of flowers, please make a donation to the First Tee Central Coast program, Central Coast Home Health and Hospice, or to your favorite charity in his honor.