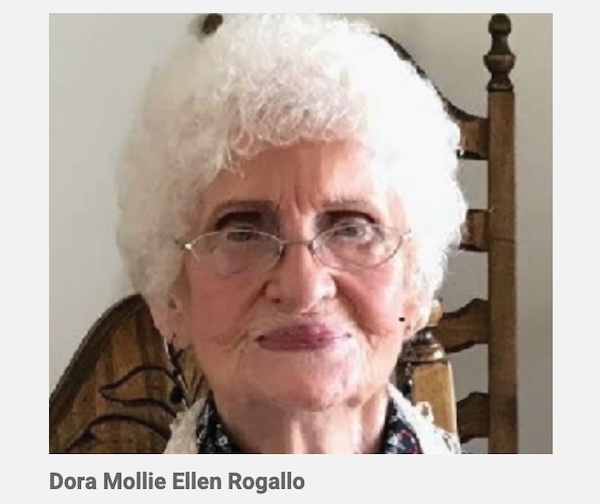 From the Nevada Appeal

–Dora Mollie Ellen Rogallo was born June 29,1917 in Monticello, Kentucky. She was named for everyone in the room at her birth – Dora, her aunt, Mollie (minister’s wife), and Ellen (midwife). She was one of eight children. Due to hard times after their father’s death, her family moved to Illinois to farm.

During her lifetime, Dora resided in Colorado, California and finally Nevada. She worked in the medical field and retired with her late husband Dr. Harold Rogallo in Paso Robles, CA where they loved walking and bird watching.

After his passing, she moved to Gardnerville and then to Minden, NV where she was residing when she passed at 103. She missed being able to travel as she got older but loved to watch the finches and quail from her deck. She was also known for her many wonderful pies and cobblers.

She leaves many friends and family including her daughter, Carol Ann Taylor, of Minden, NV, grandchildren Timothy Taylor (Suzanne) of Gardnerville, Melissa Brazeau (James) of Talkeetna, AK and Patrick Taylor (Delores) of Charleston, WV, and her great-grand-daughter, Sydney Brazeau (Will) of Laurel, MD.

Our thanks to her faithful caregivers – Sue, Phyllis, and Debbie.

There will be no service.