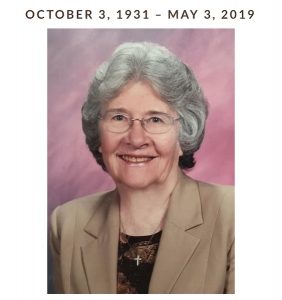 –Doris Hurd passed with peace and grace on May 3, 2019 at Twin Cities Hospital in Templeton, CA. Doris was born in 1931, in Alvin, TX the youngest of 7 children. She fell in love with Gordon and they married when she was 17. Gordon and Doris lived in 22 different states in their first few years of marriage as Gordon worked building radio towers. One night, leaving a drive-in movie, neither one of them could remember which way to turn to go home. They couldn’t remember which state they were in. They decided it was time to settle in one spot and moved to Southern California in 1954. While living in Covina and West Covina, Doris filled roles as wife, mother, waitress, and banking supervisor. She was a talented seamstress and loved making clothes for her 3 daughters. She and Gordon retired to Atascadero in 1987. Doris was a member of the Order of Eastern Star (for 58 years), the Paso Robles Republican Women Federated (20 years), and a registered member of the Daughters of the Republic of Texas (DRT).

She was preceded in death by her loving husband Gordon in 2004 and daughter Diane Shaffer in 2015. She is survived by her brother Willis Harris of Murrieta, CA and sister-in-law Betty Kaylor of Euless, TX; daughters and sons-in-law: Madalyn and Jerry McDaniel; Kathleen and Steve Buckner; and Les Shaffer; grandchildren and their spouses: Irene McDaniel and Jeff Spiller; John and Lindsey McDaniel; Danielle Shaffer; Lucas and Hannah Shaffer; Denise Buckner, Teresa Buckner, Michael Buckner, and Asher Buckner; and great-grandchildren: Easton Spiller, Hailey McDaniel, Wyatt McDaniel, and Macee Batdorf.

Doris Hurd was buried next to her husband at Atascadero Cemetery on May 9th after a private, family, graveside service.

Doris will be remembered as a loving wife, mom, and granny with a gentle and generous heart. The family would like to thank the people at Atascadero Christian Home, paramedics, Twin Cities Hospital, Dr. Bourne and his staff for their help and loving care of Doris.