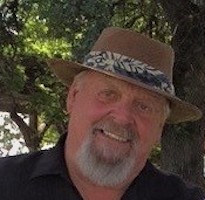 In his early life, he spent time working on the family farm, operating various types of farm equipment before the family moved to California in 1951. He attended Covina High School and spent his summers traveling back to Kansas for summer work. In 1958 he enlisted in the U.S. Navy and worked as a Radioman on the USS Montrose. During his three years in the Navy, he was able to travel to many places in Asia.

In his spare time he enjoyed riding motorcycles, playing golf, volunteering for Meals on Wheels, spending time with family and friends, with grandchildren being at the top of the list. One of his best talents was being the master of practical jokes. He was known as “Mr. Chit Chat” by many and was an avid storyteller.

He was preceded in death by his parents, Leland and Elnora and sister Katie Coliukos.

He will be greatly missed. In lieu of flowers, donations can be made to the Gary Sinise Foundation. www.garysinisefoundation.org
A Celebration of Life will be planned for later this year.

The Paso Robles Daily News publishes local obituaries and death notices free of charge from individuals and local funeral homes. See information and tips here on writing an obituary. Please submit the obituary a few days before services, if possible. To submit an obituary, please email it to skye@accesspublishing.com with “obituary” in the subject line. Please email a photo along with the obituary.