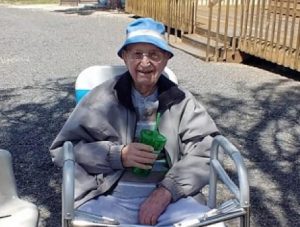 –Former Paso Robles resident Lloyd Plymate was born in Nebraska in 1924 and moved to Oregon in 1936. He went to school in Oregon City and graduated from Oregon City High School in 1943. He was drafted into the Navy in January of 1943, though he was allowed to finish high school first.

After receiving his diploma, he was sent to Port Townsend, Washington; due to all the boot camps being full, his platoon had to do all their training in and around town. His first assignment in the Navy was at Fort Worden, Washington, where he learned Morse Code.

He was then sent to Virginia to become proficient in bookkeeping. In 1945, he was transferred to Okinawa Island, Japan. On his way there, it was declared that WWII was over. He remained stationed in Okinawa for over a year regardless. In 1947, after being discharged from the Navy, he travelled to Chicago to attend television repair school.

After he graduated, he moved to Southern California- there he worked as a radio and television technician, which he did until he retired. Lloyd- being the ambitious man that he was- also owned and managed three apartment buildings in Burbank, Glendale, and Paso Robles, all in California.

In 2017 Lloyd moved to Bend to be cared for by his niece Kelly, where he lived out the rest of his days. He will be greatly missed.