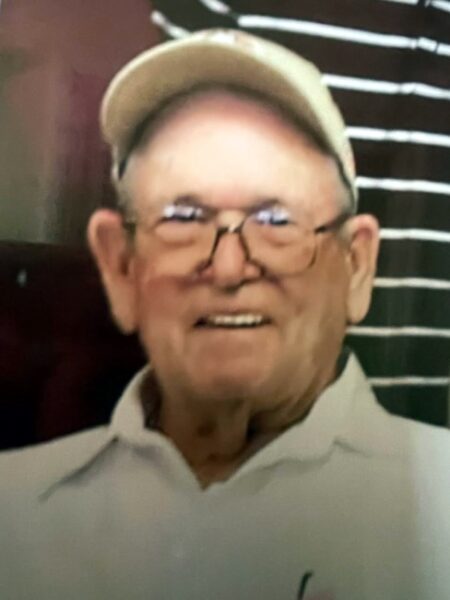 – James Arnold Palmer was raised in Southern California by his parents Clyde and Inez Palmer and graduated from Excelsior High School in Norwalk, California in 1948. His interests in Agriculture lead him to Cal Poly San Luis Obispo where he earned his Bachelor’s degree in Animal Husbandry in 1952. Putting his education on hold, he was called to serve in the US Army during the Korean War from late 1952 until 1 year after the cease-fire. Returning home in August 1954. On his third day home, he married the love of his life Ginger Beal of Arroyo Grande. They were married 67 years and 10 months.

While working several jobs and starting a family, he returned to Cal Poly to earn his master’s degree in AG Education. After student teaching in Lancaster, He started his teaching career at Shandon High School in 1957. He retired after 24 years in 1981. During his teaching tenure, his agriculture students competed and won several state judging competitions and placed high in National events. He was the President of the California State Ag Teachers Association from 1976-1977. He was inducted into the association’s Inaugural Hall of Fame Ag teachers class in 2002.

While at Shandon High, he helped as the scorekeeper for the athletic events and was a substitute bus driver when needed while being very involved in other community activities. After retiring from teaching, He continued to fill in as a substitute teacher. In some cases, he taught three generations of students from the same families.

He returned to active duty with the California Army National Guard working out of the armory in Atascadero and at Camp Roberts. He re-retired for good in 1993.

Jay lived in Shandon for the remainder of his life. He enjoyed gardening, tending to his cows, and doing research on his favorite historical subjects including family genealogy. He spent a lot of time with family and traveled with Ginger. He also served two terms on the SLO County grand jury from 1995-1997. Jay was able to travel to Washington D.C. as a part of the Central Coast Honor Flight program in 2017.

Jay passed away on June 26, just five days after his 92nd birthday and one week after father’s day. His wife and all his children were with him at home when he passed.

Jay was preceded in death by his son Scott, his Parents Clyde & Inez, His sister Joan and his brother Mike.

Jay was known and loved by many and leaves us with many pleasant memories. He will be missed.

Funeral services will be private. A celebration of life is being planned and will be announced at a later date.

The family would like to extend a very special thank you to his longtime caregiver Devon Radke. Also, recognition to all the unsung heroes at Central Coast Home Health and Hospice.

In lieu of flowers, The family asks for donations to be made in Jay’s name to: