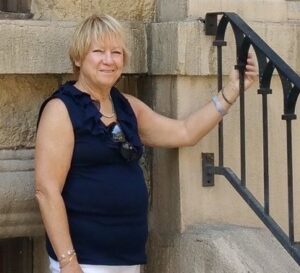 – Lynne Newhouse, a longtime resident of Paso Robles best remembered for her work in healthcare, has died at age 81.

Lynne Sharron (Boatman) Newhouse of Paso Robles passed away on Oct. 11, 2022, at Twin Cities Community Hospital in Templeton. She was 81. The cause was acute liver failure, a complication that arose following coronary bypass surgery in July.

Lynne Newhouse was a generous and vibrant person-many would call her a “character” – who loved sharing vividly detailed stories about her childhood and the history of Paso Robles. She was born on April 29, 1941, at Paso Robles Community Hospital and was the first child of her father, Cecil C. Boatman, and her mother, Myrtle F. (Morton) Boatman. At the time, Cecil was a gas station operator and Myrtle was a homemaker. After years of dedication and hard work, however, the Boatmans would open the Furniture Center in downtown Paso Robles, which would become a local mainstay.

Over time, the Boatman family thrived and grew. Lynne was joined by five siblings: sisters Cheryl and Patricia and brothers Gary, Steven, and Timothy. When she was quite young, the family moved from a farm on the outskirts of town to Vine Street in Paso Robles. Lynne enjoyed the freedom to explore the neighborhood and play with childhood friends there. The Carnegie Library in the City Park soon became a haven-she spent many hours poring over books there and developing a lifelong love of reading. She attended local public schools, graduating from Paso Robles High School in 1959.

After high school, Lynne traveled to San Francisco, to attend Mary’s Help College of Nursing, where she became a registered nurse in 1962. Mary’s Help was operated by the Roman Catholic order of the Daughters of Charity. Founded in 1633, the Daughters of Charity is a community of women dedicated to helping the poor and marginalized. The values instilled by the sisters at Mary’s Help remained central to Lynne’s sense of dedication to people in need.

With her nurse’s license in hand, Lynne stayed in San Francisco, where she worked in the Infectious Disease Unit of Children’s Hospital. While living in the Bay Area, she met Henry (Hank) Newhouse through mutual friends. The two married in August of 1963. Over the next four years, the couple had three children: Kristina, Matthew, and Brian. The Newhouse family moved many times over the next few decades, due primarily to Hank’s employment with the US Forest Service, which took them from California to Montana, Idaho, and then Alaska. She loved spending time with her family, especially during seemingly endless road trips to the middle of nowhere to camp and fish in Northern California, Montana, and Idaho.

Wherever she landed, Lynne quickly became an invaluable member of the local healthcare community. This extended to volunteer activities, whether leading Lamaze classes for expectant parents, training volunteer emergency medical technicians, or participating in end-of-life patient care through hospice. One point of pride for Lynne during this era was her role in establishing a birthing room for new families while she was the Director of Nursing at Syringa General Hospital in Grangeville, Idaho. In an interview for the Lewiston Morning Tribune published in January 1980, she spoke about the beauty of small healthcare institutions and described new mothers and babies as the “heart of the hospital.”

After she and Hank divorced in the early 1980s, Lynne re-examined her life goals and decided to take a big leap by applying to and being accepted into one of the first Certified Physician’s Assistant programs in the nation, MEDEX Northwest, which is part of the University of Washington School of Medicine. At her graduation in 1991, she was honored as an outstanding student in the area of community-oriented public health. That same year, Lynne returned to California, where she first landed at Clínica Sierra Vista, a health organization that provides care to migrant farmworkers, as well as rural and isolated community members subsisting on low or fixed incomes.

In 1994, Lynne returned to Paso Robles to help with the care of her aging parents. However, she continued her efforts in public health, at San Luis Medical Center in Pismo Beach, Community Health Center (CHC) of the Central Coast in Templeton, and then the CHC in Paso Robles. In the same period, she worked part-time in a mobile health clinic, operated by Nipomo Community Medical Center, which provided assistance for the uninsured, working poor, and unhoused across San Luis Obispo County, from the Five Cities area, north to San Miguel and as far east as the Carrizo Plain. She said of these activities, “I was born and raised here. The people of this community gave me scholarships and sent me to nursing school. This is giving back.”

Retirement provided Lynne with an opportunity to expand her volunteer activities. She regularly served as a poll worker for county elections. She dedicated more time to docenting for the Paso Robles Historical Society at the Carnegie Library, where she treasured her encounters with newcomers and visitors, with whom she could share stories about the agricultural roots of her hometown. As a member of the Native Daughters of the Golden West, she helped with the Pioneer Ladies Tea, which honors the annual Pioneer Day Queen, other pioneer women, and their descendants. She took great pleasure in being a downtown ambassador, with her bichon frisé, Bijou, acting as sidekick, for the Paso Robles Downtown Main Street organization because it allowed her to get to know the many wonderful downtown merchants. She participated in annual activities such as Pioneer Day, the Downtown Holiday Lighting Ceremony, the Paso Robles Olive Festival, and the Central Coast Lavender Festival.

Lynne Newhouse is survived by her children-daughter Kristina Newhouse and her partner Alain Millar, of Milwaukie, Oregon; son Matthew Newhouse and his wife, Heather of Hailey, Idaho; and Brian Newhouse and his wife, Ginna, of Potomac, Maryland-and four grandsons, Levi and Sawyer Newhouse, of Hailey, Idaho and Bode and Cooper Newhouse of Vancouver Washington. Four of Lynne’s siblings in Paso Robles survive her: sister Cheryl Boatman, sister Patricia (Boatman) Barrett, Gary Boatman and his wife Anna, and brother Timothy (Tim) Boatman and his wife Pamellia (Pam). Lynne remained close to her in-laws, David and Yvonne Newhouse of San Mateo, and Margaret (Newhouse) McEwen of San Mateo.

As an aunt, Lynne loved and was loved by many nieces and nephews, as well as 3rd and 4th generation younger cousins. She regularly attended family gatherings and life events with them. She was there to listen or give words of encouragement or advice. She shared her love through cards, notes, and little gifts recognizing any occasion.

Lynne’s children are eternally grateful to friend and caregiver Andrea (Janolis) Boatman, whose presence allowed Lynne to live independently and with dignity until her death.

A Celebration of Life for Lynne Newhouse will take place at Chapel of the Roses on Nov. 12 at 10:30 a.m. Prayers and opening remarks will be made by Pastor Romero of First Mennonite Church of Paso Robles. All are welcome to attend.