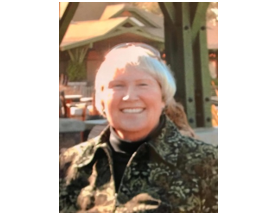 Graveside services are planned for Paula at Santa Maria Cemetery on Friday, Jan. 14

– Paula Voigt passed away peacefully in Paso Robles, CA with family at her side in the evening of Jan. 3, 2022. She was 80 years old.

Paula was born December 22, 1941 to Elsie S. Preston and Leonard W. Preston in Glendale, California. After growing up in Southern California, Paula began college studies at Brigham Young University. She soon found the love of her life, Stephen F. Voigt (Steve). The two were married in July 1961. They began life together stationed at Fort Hood, Texas where Steve served as a military policeman in the U.S. Army. Together, Paula and Steve were blessed with three daughters; Melinda (Mindy) and Melissa, who arrived only 10 months apart while the newlyweds were stationed in Texas, and then Michelle, four short years later after returning to California.

When Steve’s military service ended, Paula and Steve moved the family to Glendale, CA where Steve began his civilian law enforcement career. A few years later, Steve accepted a position in Santa Maria where his mother’s family (Newlove) homesteaded in the late 19th century. While at the Santa Maria Police department, Steve served as a motorcycle officer and later worked as a detective and juvenile officer. Paula and Steve remained active in the Santa Maria community by volunteering for the March of Dimes and Rotary Club and serving for several years as officers for the Santa Maria Valley YMCA.

Paula and Steve supported the many interests of their daughters. Paula expertly orchestrated the family’s schedule. She tirelessly shuttled Mindy, Melissa and Michelle to various activities including, Girl Scout and Campfire meetings, swim, dance and music lessons and cheerleading, as well as horseback riding after school and on weekends. With so much time spent driving back and forth to the horse barn, it soon became necessary for Paula and Steve to find a home with space for the girls to enjoy their horses. They purchased a small place in Nipomo and named it “Rancho Nipomo.” Paula’s interest in horses grew while she watched her daughters caring for and riding their many horses. Paula enjoyed riding the big flashy sorrel gelding named Big Splash that was the girls’ first horse. She later purchased Coffee Break for herself. Paula loved riding the family’s many horses on trails with her friends all over the Nipomo Mesa and beyond. On occasion, Paula also exhibited the horses at nearby horseshows. Paula’s favorite equine friend was her home-bred, flashy, chestnut 3/4 Arabian gelding, named Timmy. Paula and Steve moved to Creston, CA after Dad’s retirement from the police department. They later moved to Templeton, CA and eventually settled in Paso Robles, CA where they enjoyed their life together until Steve’s passing in 2006. Paula and Steve were married for 45 years.

Paula is preceded in death by her parents and her husband Steve. She is survived by her daughters, Melinda (Voigt), Melissa and her husband Michael (Traylor) and Michelle Voigt. Paula was blessed with five grandchildren; Shelby, Heather, Stephen, Sara and Clayton, as well as two great grandchildren; Levi and Avery.

Graveside services are planned for Paula at Santa Maria Cemetery located at 1501 S. College Dr, Santa Maria, CA 93454 on Friday, Jan. 14, 2022 at 2 p.m. In lieu of flowers, the family asks for you to please consider a small donation to the American Cancer Society in Paula’s name.