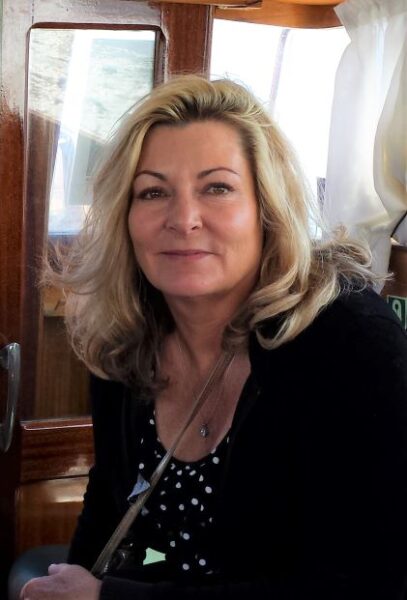 – It is with heavy hearts that we announce the passing of Angela Renee Mitchell on May 2, 2022, from cancer. Angela Mitchell was born in, Gardena, Calif. to Jeri Wilkinson and William Evans on March 5, 1958. She graduated from Newbury Park High School where she was an exemplary student, class president, and record keeper of statistics for all of the sporting teams.

After working full-time for a few years, she began putting herself through college. She attended Cuesta College, earning her AA degree in 1989. In 1993 she graduated with a Bachelor of Science in Business, Business Administration and Finance from Cal Poly State University, San Luis Obispo.

Angela was the first Vice President of Information Technology for Heritage Oaks Bank. She successfully managed the bank’s five-year technology plan that included networking computer systems for increased customer convenience. During that time, the bank grew from 35 to 125 employees. She made the decision to resign in order to develop and grow Mitchella Vineyard and Winery with her husband Darren.

Angela was the heart and soul of Mitchella Vineyard & Winery. Quality wine, exquisite food, impeccable service, and a wonderfully detailed experience were of the utmost importance to her which she exhibited through her small business. Her passion for education and wine was evident in every event.

She became a large supporter in the local community. She was the volunteer coordinator for Paso Robles ACORN (A Community Organization Recognizing Need), a non-profit community fundraising organization. Under her supervision PR ACORN raised $500,000 to furnish the new city library and the opening collection. Angela was the treasurer for PR ACORN for numerous years, she was a pillar in founding the Women’s Power Lunch that gave over $100,000 from local women to support nonprofits in North County.

She was the project leader for building Centennial Park. She raised funds for the Pioneer Park Skate Park, the Public Safety Building Memorial Statue, and the Cuesta College, North County Campus.

Angela served on the Cuesta College Board of Trustees for 20 years. She was enthusiastic about the chance to help guide Cuesta College to provide access to all students. She had a passion for the re-entry student because of her past experiences. She served three terms as President of the Board of Trustees and retired in 2020. In 2004, Phi Delta Kappa, the professional fraternity of educators awarded her “Citizen of the Year”.

In 2018, she was named the J. Vard Loomis Distinguished Board Service Award in recognition of her outstanding board service and her exceptional representation of Cuesta College. She balanced strong leadership with an optimistic outlook that was refreshing and impactful to everyone whose lives she touched.

Angela will leave a big void in our community and will be sorely missed. Donations can be made in Angela’s name to the Paso Robles Children’s Museum, Pioneer Museum, or Paso Robles Loaves & Fishes.