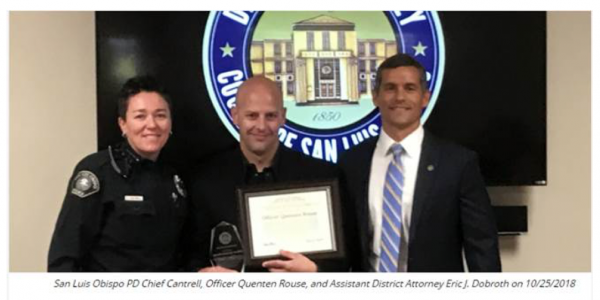 While on patrol during the night of Oct. 5, Officer Rouse initiated an otherwise standard traffic stop on a vehicle traveling in downtown San Luis Obispo. During the stop, Officer Rouse noticed several red flags that suggested the driver may be involved in human trafficking. He noted a significant age difference between the parties, that the driver and passenger were not related, and items in the vehicle included a wig and revealing clothing. The driver was initially arrested on an unrelated traffic misdemeanor warrant and booked into county jail, rather than being released with a citation to appear in court. The investigation continued and Officer Rouse’s initial suspicions of human trafficking were confirmed. The driver was subsequently charged with felony human trafficking of a minor for commercial sexual exploitation of a 14-year-old female victim that can be punished by life in prison. Due to Officer Rouse’s exemplary attention to detail and follow up work on this case, a 14-year-old young woman was protected from continued exploitation.

“Officer Quenten Rouse’s swift action during a routine traffic stop that freed a young victim of sexual slavery is in keeping with the finest tradition of our local law enforcement,” said District Attorney Dan Dow. “This timely arrest sends a strong message to traffickers everywhere that their predatory behavior will not be overlooked in San Luis Obispo County and that they will be prosecuted to the fullest extent of the law. I am proud to present Officer Quenten Rouse with the very first District Attorney Special Commendation award in recognition of his actions that bring great credit to law enforcement within San Luis Obispo County.”

It has been nearly four years since District Attorney Dan Dow formed the San Luis Obispo County Anti-Human Trafficking Task Force combating modern-day slavery occurring within our county. The collaborative task force effort has included several areas of emphasis including: ensuring that law enforcement officers are trained in identifying potential trafficking, treating those who are trafficked as victims and not criminals, educating our community that trafficking is happening here, and providing safe and supportive services for those victims who are identified.

Since the task force was formed, we have had several successful investigations and prosecutions for human trafficking including People v. Oscar Higueros (2016) and People v. Richard Scott Brooks (2015). Both Higueros and Brooks were convicted and are serving life sentences in prison.