Olive products for every aspect of life 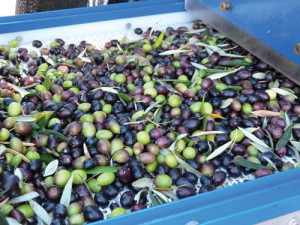 Yves and Clotilde Julien began what is now Olea Farm by planting 1200 dwarf olive trees on their hilltop property in Templeton with the intention of making olive oil for their own use. However, they did not anticipate the amount of olives that these trees would yield. What was meant to be a small project eventually grew into Olea Farm.

Now Olea Farm olive oil can be found in stores and restaurant kitchens throughout Templeton and Paso Robles, as well as in Los Angeles. Olea Farm also produces olive oil body products such as lotions and soaps from their olives, and Clotilde encourages visitors to Olea Farm to use olive products in every part of their lives.

Clotilde makes tea from dehydrated olive tree leaves—which she praises as having all the antioxidant properties of olive oil without the fat—and cooks french fries in olive oil. She serves bread, jam and olive oil for a simple breakfast and says that olive oil can be eaten with breakfast, lunch and dinner.

Enthusiasm for all things olive

Clotilde says that she and Yves, both “Master Millers out of UC Davis,” were planning on a semi-retirement when they moved to the U.S. from France and decided on the Templeton/Paso Robles area as where they would love to live after traveling throughout the US. They chose the property where Olea Farm is now, and where they now live, after getting to know the area for a few years. Then they settled in to enjoy their new home. However, the business grew and the idea of retirement shrank from their plans.

Mill on Wheels and more

Yves and Clotilde have added another component to their business – the Mill on Wheels. The Mill on Wheels is the world’s largest mobile olive press, and one of only four in the world. Yves and Clotilde, along with other partners, designed the press to fill a void in the area. The Central Coast is an ideal climate for growing olives, but for producers it is not always economically feasible to own their own press. With the Mill on Wheels many growers can use this press on their property and label their oils as “estate processed.”

Clotilde’s dedication to making high-quality olive oil is clear as she describes the response Olea Farm has received from local restaurants. Olea Farm delivers the oil directly to each restaurant that they supply—sometimes in a 55-gallon drum—so that they can maintain a personal relationship with the chefs and owners at the restaurants.

The dedication that Yves and Clotilde have to their business shows through in the oil they produce. Visitors to their Templeton tasting room can get a glimpse of the trees that inspired the business and enjoy a taste of the inspired oil of Olea Farm.