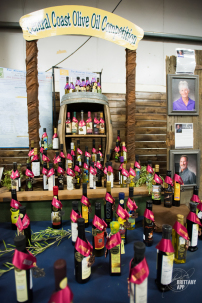 The Central Coast Olive Oil Competition provides a venue for California olive oils to be professionally judged and to educate consumers on the wide array of olive oil styles produced in California. The cost is $60 per entry. Judging takes place Wednesday, April 19. To qualify for entry in the 2017 Central Coast Olive Oil Competition, 100-percent of the olives used to produce the olive oil must have been harvested within the state of California.

Olive oil entries will be awarded Gold, Silver and Bronze medals in their respective classes as well as “Best of Class” and “Best of Show.” Organic and conventional method will be judged separately, as well as flavored oils. Entries that earn medals will be showcased at the 2017 California Mid-State Fair as well as the 2017 Lodi Grape Festival.

Registering for the competition is available at http://cmsfw.fairmanager.com/ until Thursday, April 6. For more information, please visit http://centralcoastwinecomp.com/olive-oil/.