One dead, one injured in multi-vehicle traffic accident 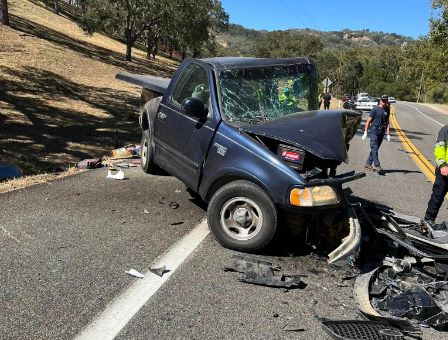 Identity of fatal victim not being released at this time

– On Saturday at approximately 11:36 a.m., the Atascadero Police Department and Atascadero Fire and Emergency Services Department were dispatched to a reported head-on traffic collision on Hwy 41 and Old Morro Road East.

Upon arrival, officers discovered the sole occupant of one vehicle had sustained fatal injuries from the collision. The identity of the victim is not being released at this time.

Officers determined the deceased driver was traveling westbound on Hwy 41 and for an unknown reason crossed over the double yellow line and into oncoming traffic where his vehicle collided head-on with a second vehicle traveling eastbound. The second driver sustained major injuries as a result of the collision and was subsequently transported to Sierra Vista Hospital for treatment. A third vehicle, also traveling eastbound, swerved off the roadway to avoid the collision but the driver lost control and the vehicle struck a telephone pole. This driver was uninjured.