One person injured in stabbing in Paso Robles 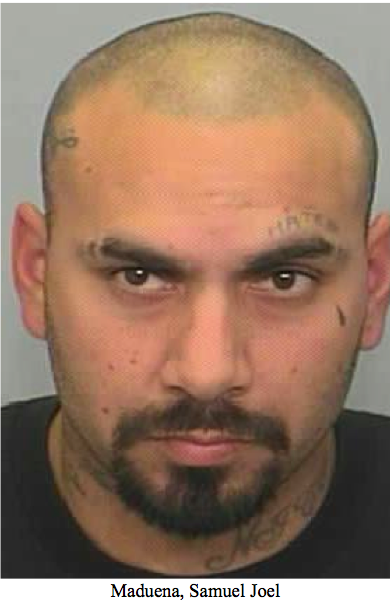 The suspect has been identified as 36-year-old Paso Robles resident Samuel Joel Maduena.

– On Sunday at approximately 1:40 p.m., the Paso Robles Police Department received a report of two males involved in a physical fight in the 3100 block of Spring St. Upon arrival, officers located one male adult victim with an apparent stab wound to his lower left back. The adult male suspect left in a vehicle prior to officers’ arrival.

The 30-year-old victim was transported by ambulance to a local hospital with wounds that do not appear to be life threatening. During the investigation officers learned the victim and suspect are related and this was an isolated incident.

The suspect has been identified as 36-year-old Paso Robles resident Samuel Joel Maduena, described as a Hispanic male adult, 5’09” tall, weighing approximately 240 pounds with black hair and brown eyes. He has several tattoos on his face and neck. Maduena was last seen wearing a black hat, black sweater and blue jeans. He fled the scene in a black 2011 Honda Accord four door sedan with California license plate 6PTW612. Maduena should be considered armed and dangerous and anyone who sees him should call 9-1-1 immediately.

This is an ongoing investigation and anyone with information about this case is encouraged to call the Paso Robles Police Department at (805) 237-6464. Persons wishing to remain anonymous are encouraged to call Crime Stoppers’ 24-hour hotline at 549- STOP or by texting “SLOTIPS” plus your message” to CRIMES (274637).