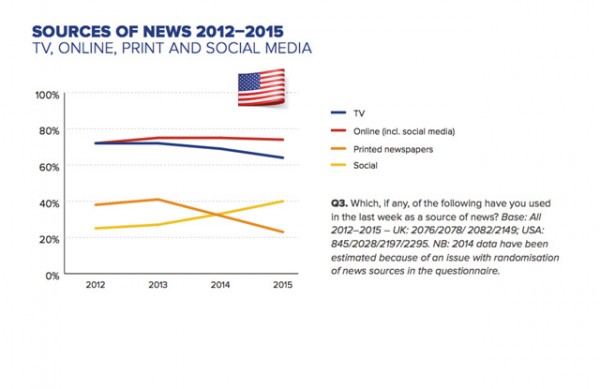 Infographic from Reuters shows the growth of online news. This questions asks “Which, if any, of the following have you used in the last week as a source of news.”

The Reuters Institute Digital News Report 2015 found that 43-percent of Americans tapped online sources as their “main source of news” compared to 40 percent for TV, which for decades was the top news source in the nation.

It also found that printed newspapers are at their lowest point for being a news source, even below social media websites.

To keep pace, many news operations have shifted emphasis to digital platforms and many have moved to paywalls, including the Wall Street Journal and New York Times.

Main sources of news in the US

Scott Brennan, publisher of the Paso Robles Daily News, says he has seen similar growth trends with his online news site. “The traffic on this news website has grown by leaps and bounds in the past few years,” Brennan says. “In the month of July, our site hit an all-time record of 243,699 page views. By comparison, July 2014 saw 144,814 page views and July 2013 just 37,633.”

“I think the reason our news site has been so successful is that we are really focusing on what local readers want from their news sources,” Brennan says. “They want quality news that’s delivered quickly, that’s free, and that’s widely distributed by email, Facebook and Twitter.”