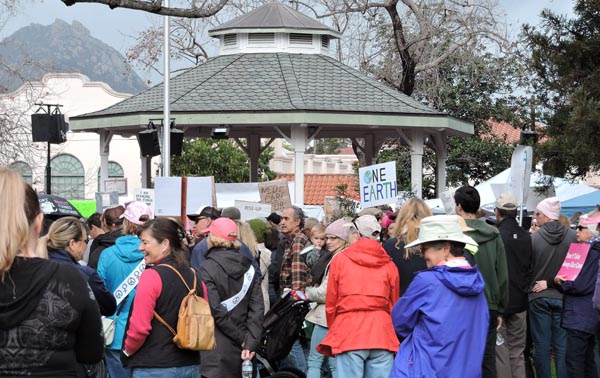 Attendees at the 2017 Women’s March in San Luis Obispo.

–Women’s March SLO (WMSLO) is starting a month-long public awareness campaign regarding the effects of political violence and intimidation on democratic participation. The rise in political violence, which includes death threats, rape threats, misogyny, disparagement, and sexist and racist abuse, deters people from running for office, serving, and getting involved in public service, according to Andrea Chmelik of WMSLO.

Below, find a letter signed by WMSLO’s organizers, as well as local elected officials, including Congressman Carbajal and State Senator John Laird. WMSLO is asking the public to add their names to the letter and will hold a panel discussion with elected officials on March 25, the details of which are available here.

Harassment of elected officials must stop

What we allow is what will continue. Are we willing to put an end to escalating harassment and intimidation of our elected officials, or will we sit on the sidelines?

Political violence is not a new phenomenon. Those seeking to serve in public office have always faced hostility. Now, as a record number of women and other underrepresented groups have made inroads into elected office, the reactions have become heightened and dangerous. The mix of the digital era, pandemic isolation and growing partisanship provides a powder keg ready to explode.
With the growing number of women in office, the violence towards them is also rising. Violence against women in politics takes many forms including death threats, rape threats, sexual harassment, misogyny, disparagement, and sexist and racist abuse. These tactics attempt to silence and to force compliance. They aim to undermine our democracy by preventing true representation.

From north to south and coast to inland, SLO County has seen numerous egregious acts against women candidates and elected officials. A razor blade in a tire, an intruder at a city hall, a public commenter spewing misogynistic accusations, a letter to the editor containing a veiled death threat, a social-media poster slinging sexualized tropes. These are moments of abhorrent action, and they have lasting effects.

Every generation is responsible for strengthening our democracy with equity, respect and fairness. It is up to us to be the change we want to see. We can be passionate but respectful in our dissent. We can be courageous but non-violent in our disagreements. What we cannot do is accept that political violence comes with the territory. Instead, we must make this behavior unacceptable. When we do, we will be able to encourage true dialogue, welcome diverse ideas, make space for underrepresented people, and ultimately grow the number of participants in our democracy.

How can we make a difference? Demonstrate respectful public discourse. Be a constructive contributor in person and online. Call out abusive and inappropriate behavior. Support a candidate or elected official. Attend public comment, not just when you’re upset but also when you want to share a word of praise. And when your representatives share what is happening, make a public display of your solidarity. You might even consider joining politics yourself – apply for a board or commission, or run for office. Above all else, engage. Don’t let the absence of your voice be your complicity.