Paso Robles News|Tuesday, September 28, 2021
You are here: Home » Opinion » Opinion: We were not the enemy, professor emeritus recalls

Opinion: We were not the enemy, professor emeritus recalls 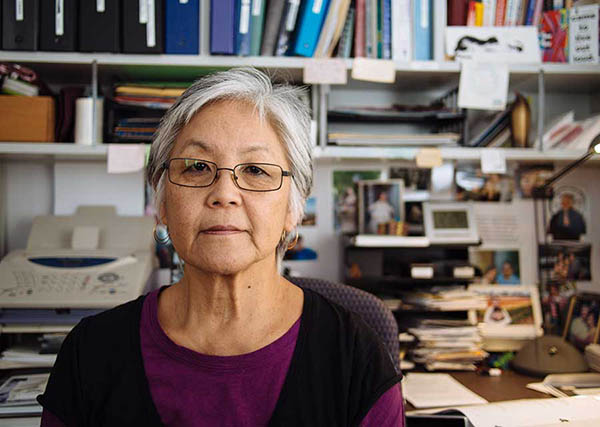 Professor emeritus Satsuki Ina in her home office in Sacramento.

–When the Imperial Japanese Navy attacked Pearl Harbor, Japanese Americans were as shocked as most Americans. We were terrified, angry, and wanted to defend our United States. Many young Japanese American men went, almost immediately, to sign up for military service only to be turned away, classified as ineligible to serve. Japanese American men who were already in the service were no longer allowed to carry weapons, and endured other hardships.

My parents, both American citizens, had been contributing to the Red Cross, volunteered for the Civilian Defense, and took pride in their right to vote at every election. So our patriotic loyalty, like other Americans, was immediately intensified and we were outraged. But it wasn’t long, maybe even a few days, before children at school, employers, neighbors suddenly saw our Japanese faces as the face of the enemy. Our children were derided in the classroom, and adults were told not to come to work, or found themselves sneered at or even spit upon by people who didn’t even know us. This might have seemed understandable at the time, but soon the newspapers were headlining the “yellow peril” in our own backyard, and government officials began heralding the need to make America safe by removing the “Japs” from the West Coast.

Many people I have interviewed describe an unforgettable, sinking feeling as they began to realize that America couldn’t/wouldn’t distinguish the “terrorists,” the enemy, from the Americans who had lived as contributing members of their community for decades. And then of course, within 10 weeks from the bombing, President Roosevelt signed Executive Order 9066, eventually incarcerating 120,000 people, for reasons of national security, based on their race and ethnicity to desolate inland regions in ten concentration camps for the duration of the war. This is where I was born. My parents were held for over four years without any due process of law. Even orphans who had one quarter Japanese blood were removed from orphanages and incarcerated in the Manzanar concentration camp orphanage.

Pearl Harbor Day is not an easy day for most of us old enough to remember or have lived through the experience. The double betrayal of the bombing by an aggressor nation resulting in the deaths of our fellow Americans, and then the incarceration of men, women and children, based on race hatred and wartime hysteria is not without emotion. But time has, until recently, helped to weather the intensity of feelings in our community. However, there is no doubt that current political rhetoric raising the so-called “precedent” of the incarceration of the Japanese Americans in 1942 as justification for a Muslim registry, frighteningly echoes our own past experience. We are mobilizing our resources, speaking out, and offering our support to others who are vulnerable, once again, to race hatred and hysteria. We have, as a result of our own incarceration experience, have resolved that such an injustice, violation of our civil liberties, should never happen again to any vulnerable group.

Satsuki Ina, Ph.D. was born in the maximum security concentration camp for Japanese Americans at the Tule Lake Segregation Center in Northern California in 1944. A retired professor, she currently has a psychotherapy practice in Oakland, specializing in the effects of collective and historical trauma. She has produced two documentary films, Children of the Camps and From a Silk Cocoon. She has just completed a book based on letters, diaries, and poetry written by her parents, who were held in separate prison camps.