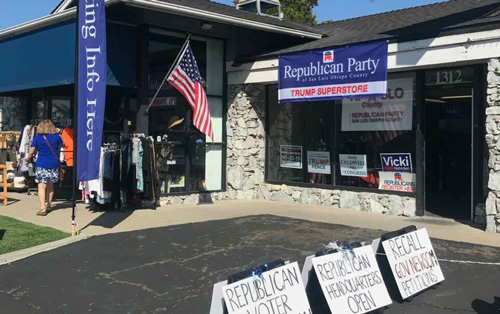 –The Republican Party of San Luis Obispo County joins with all people of goodwill, ordinary citizens and public officials alike, in deploring Wednesday’s U.S. Capitol attack, the break-in and destruction of public property, the violence, the injuries to law enforcement officers and the tragic loss of life.

The Capitol is the seat and symbol of our self-governing Republic. We honor our Nation’s sacred constitutional legacy of the rights of speech and assembly. However, breaking into the Capitol and fomenting damage and destruction is not exercise of speech or assembly. Our freedoms are not a license to break the very laws that make these freedoms possible.

We respect and support the processes of self-government set forth in our Constitution and laws, as passed down from our Nation’s founders and defended by the life and blood of citizens and soldiers alike, for more than 230 years, during wars and peacetime.

The 2020 Electoral College vote having been resolved, an orderly transition of power must and will take place. The assault on that process by the brief takeover of the Capitol was repelled and order was restored in short order. However, we must remain vigilant to protect both the right to vote, and the integrity of the vote, which is the basis for all representative government.

The curtain has not fallen on the need for a careful, thorough investigation of all legitimate questions concerning the integrity of this election. These concerns have not been conclusively resolved in the short period from November 3, 2020 to the present. Such investigations by the States can sort truth from falsity and provide citizens with the kind of honest, transparent information needed to allay their concerns about the integrity of this election. This is also the best and most prudent way for each State to evaluate its election processes and to consider changes to better ensure that election integrity is maintained or restored.

Unfortunately, the San Luis Obispo Tribune, reflecting its McClatchy corporate parent’s outrageous leftwing attacks on California Republicans, has blatantly attempted to take partisan advantage of this national tragedy. It has called out local Republicans for their exercise of free speech about the election and has engaged in “cancel culture” (public shaming) locally to suppress our activity.

The Tribune’s campaign to shame and suppress in order to sell newspapers sadly reflects the national media’s shameful, decades-long and self-serving effort to inflame the public. This does not contribute to the healing of the Nation’s wounds.