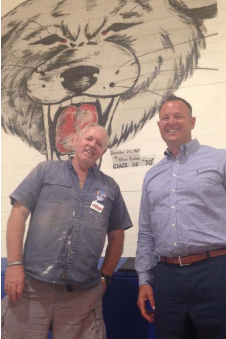 – Last week, Steve Kalar, an Paso Robles High School alumnus from the class of 1970, came by Flamson Middle School to restore a painting of the Bearcat mascot that he originally did back in 1969, when the high school was located at what is now the Flamson campus.

During the summer, as the gym was being remodeled, staff uncovered the painting which was hidden under a framed picture on the wall. Gene Miller, Principal at Flamson, posted the photo on Facebook and, through the magic of social media, word got back to Kalar. He offered to come to the school and not only restore the painting, but work with the students on future projects.

Kalar has been a professional artist since the age of 11. As a student at PRHS, he was a member of the marching band and was asked to draw his version of the bearcat onto the football field for the band’s halftime show. Gil Asa, the football coach at the time, liked it so much that he asked Kalar to paint it for all the home games. The school secretary, Marilyn Hansen, also asked him to draw the bearcat onto some stationary thus formalizing the bearcat drawing as the mascot for PRHS.

Kalar will be working with the advanced art class at Flamson to add the Flamson Cougar logo to the other side of the gym. In addition, he is going to help create another mural on campus, again using students as the artists. He said, “If I have a chance to work with young minds, then