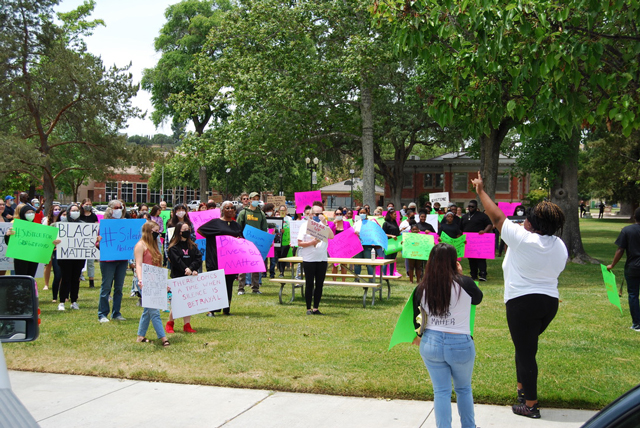 –Over 100 protesters gathered peacefully Sunday at noon in Paso Robles Downtown City Park for a Black Lives Matter Protest to remember the death of George Floyd. Protests and riots have spread to dozens of cities across the United States since Floyd’s death in Minneapolis, Minnesota, on May 25.

The protest began at the park’s gazebo with a moment of silence for eight minutes and 46 seconds long to recall the length of time Floyd was handcuffed and lying face down on a street during his arrest, while a police officer pressed his knee into Floyd’s neck.

Prayers followed the silence and organizers invited anyone in attendance to come up to the gazebo and speak. Paso Robles Police Chief Ty Lewis came up and thanked the protesters for being peaceful and he said one of the top priorities for the local police department is to build trust with the community. 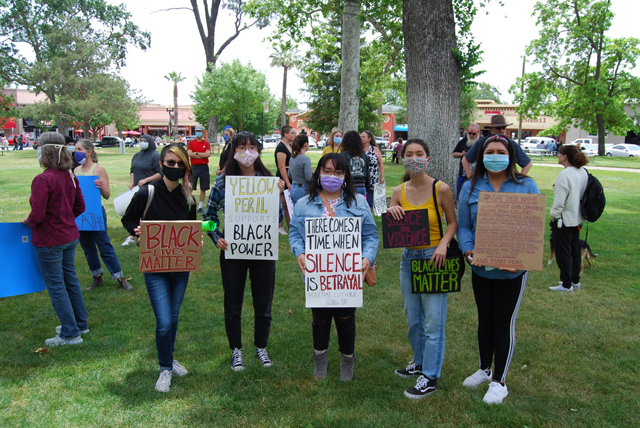 Attendees held dozens of hand-made signs with messages including,  “Spread love”, “Be the change”, “I can’t breathe”, “Speak up about racial injustice”, “Dear good cops, your silence is consent,” “Love, don’t shoot”, “There comes a time when silence is betrayal”, “Black lives matter”.

After about 45 minutes at the gazebo, the protesters marched on the sidewalk around the park shouting, “No justice, no peace,” and, “What’s his name? George Floyd.”

The protest was organized on social media and hosted by locals Sandra Bautista Floyd and Porche Bailey. 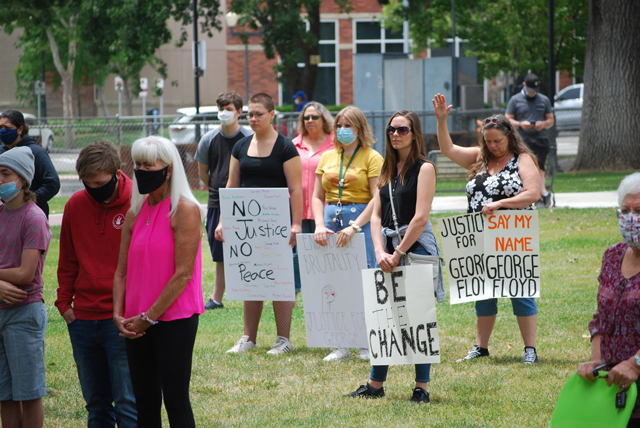 A similar protest was held on Sunday at 1 p.m. in San Luis Obispo. Over 2,000 people gathered in Mitchell Park to protest Floyd’s death.

His action follows several nights of riots, violence, looting and fires set to buildings during protests for George Floyd.

On Saturday, the State Office of Emergency Services contacted the San Luis Obispo County Sheriff’s Office to request mutual aid to Los Angeles County, according to a statement from the sheriff’s office.

The sheriff’s office along with law enforcement agencies from across San Luis Obispo County are responding to help calm the civil unrest which is taking place in Los Angeles.

“We have currently deployed 35 Deputies to assist law enforcement in that area as needed,” said Tony Cipolla, spokesman for the SLO County Sheriff.

“The Sheriff’s Office wants to reassure the community that while we have sent a significant number of law enforcement personnel to Los Angeles County, we have sufficient resources to maintain the safety and security of San Luis Obispo County,” Cipolla said.

“The Sheriff’s Office will continue to coordinate resources with other local law enforcement agencies to provide further personnel to Los Angeles County if additional resources are requested.”