Over 1000 people turn out to celebrate Holiday Lighting Ceremony 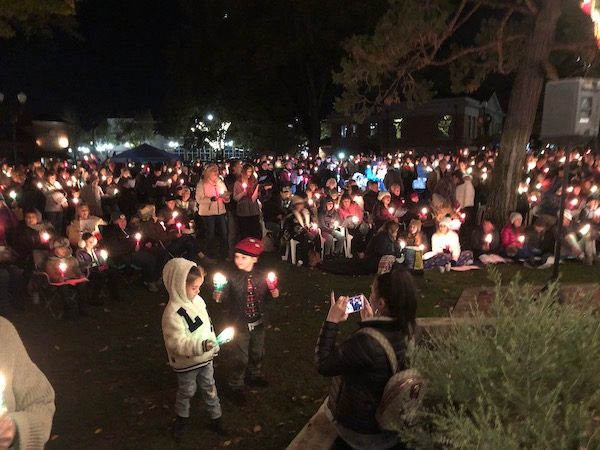 –Despite chilly temperatures, more than one thousand people turned out Friday evening for the 33rd Annual Holiday Lighting Ceremony at the Paso Robles Downtown City Park. Main Street volunteers handed out hundreds of candles to those in attendance with instructions not to light them until Mrs Santa Claus turned on the lights. At six, the crowd counted down and Mrs. Claus through the switch. Suddenly, lights illuminated the trunks and limbs of the tall oak trees surrounding the Gazebo. The bandstand itself lit up and showed several costumed celebrants, including local radio personality Chad Stevens wearing a top hat and tails. Chad led Supervisor John Peschong, the Paso Robles City Council and the crowd in a series of Christmas carols. Chad and John Laird also sang holiday songs together. 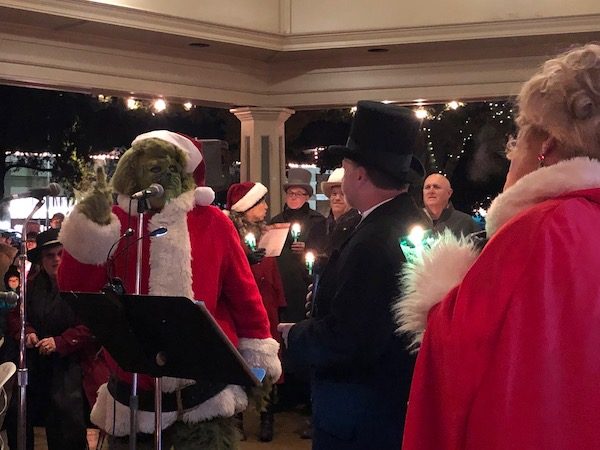 During Deck the Halls, the Grinch made an uninvited appearance and tried to put a damper on the event. Fortunately, he could not dissuade the audience from celebrating.

During Deck the Halls, the Grinch made an uninvited appearance and tried to put a damper on the event. Fortunately, he could not dissuade the audience from celebrating. The Grinch left disappointed, but vowed to return for the 58th Annual Paso Robles Christmas Light Parade, Saturday, Dec. 7 and probably again for the 33rd Annual Vine Street Victorian Christmas on Saturday, Dec. 14.

After the Christmas carols, some stayed for hot chocolate, but many drifted into downtown restaurants and retail businesses to warm up, shop and grab dinner. The 33rd Annual Holiday Lighting Ceremony may have been one of the colder editions at the Downtown City Parks, but it warmed the hearts of hundreds of people who attended the event.