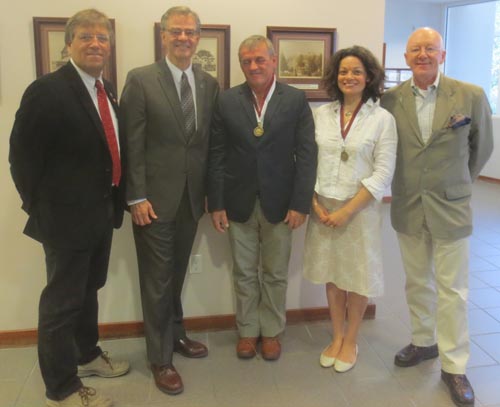 Bala, who is also director of the Polish-Ukrainian Society in Warsaw, Poland, was in town for a “Paderewski in Paso” fundraiser weekend for the Paderewski Festival’s Youth Exchange Program that sends talented young pianists from the Central Coast to Poland and Paderewski’s former manor house, Kąśna Dolna, for master classes, performances and history tours. Two Central Coast students and a chaperone participated in the exchange program this summer, while students from Poland and Ukraine are expected in Paso Robles for the November festival in 2016.

A highlight of the sold-out weekend was a piano performance by Marianna Humetska at the home of Marilyn and Ken Riding followed by multi-course dinner catered by Charlie Paladin-Wayne paired with wines from Enfold and Cass. On Sunday, Marek Zebrowski, artistic director of the Paderewski Festival in Paso Robles and director of the Polish Music Center at the University of Southern California, gave a lecture about Paderewski’s years in Paso Robles at Epoch Estate Wines’ historic York Mountain production facility. The lecture was followed by a tour of the Epoch’s new facilities led by Kristen Darnell, director of sales and marketing at Epoch Wines, and a Thomas Hill Organics lunch paired with wines at Epoch’s farmhouse.

“The Paderewski Festival in Paso Robles is thrilled to have the support of our new partners in Poland and Ukraine, especially since they offered to help with travel costs of Polish and Ukrainian students when they come to Paso Robles in 2016,” said Zebrowski. “In addition, the Paso Robles Festival’s Youth Exchange Program will have access to new venues for concerts, master classes and overnight accommodations near Warsaw, plus an opportunity to perform at the Lviv Opera in the summer of 2017.” Humetska, also a member of piano faculty at the National Music Academy in Lviv, has agreed to mentor Ukrainian students from the area where Paderewski was born and liaise with the Khmilnyk Music & Arts School to select talent for upcoming exchange programs.

Bala and Humetska also met with Paso Robles Mayor Steve Martin and Councilman John Hamon, who underscored the city’s support of the Paderewski Festival and with assistance in securing visas for the 2016 Exchange Program, especially those from the Ukraine. At the end of the meeting Humetska and Bala were presented by Mayor Martin with specially engraved medals from the city.

The 2015 Paderewski Festival in Paso Robles celebrates the legacy of one of Paso Robles’ most famous residents Ignacy Jan Paderewski –pianist, composer, international politician, local landowner, grower and winemaker – with four days of concerts featuring world-class artists and winners of this year’s youth piano competition. Other special events include master classes with visiting artists, film screenings, and wine tastings spotlighting local wineries. The festival will be held in several venues in Paso Robles, Calif., Nov. 5-8. Tickets may be purchased online at www.paderewskifest.com or by calling (805) 235-5409.