–Ignacy Jan Paderewski is known as an icon of Paso Robles history—and now he is being celebrated with a locally brewed Polish-style porter to commemorate the Paderewski Festival held in his honor. 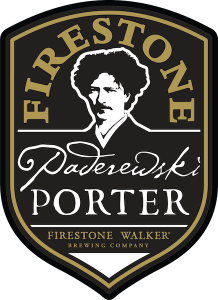 Created by Firestone Walker Brewing Company, the new “Paderewski Porter” will be available on draft at two 2018 Paderewski Festival events in Paso Robles—the 7 p.m. reception and concert at Cass Winery on Nov. 1 and the “Three Paderewskis” musical at the Park Ballroom on Nov. 2. Firestone Walker has been a longtime sponsor of the festival.

Paderewski Porter will also be available at all Firestone Walker locations starting this Friday for a limited time. It will also be featured at a concert at Zipper Hall in Los Angeles celebrating the 100th anniversary of Poland regaining independence.

Paderewski Porter was brewed at Firestone Walker’s Propagator pilot R&D brewhouse in Venice with the help of a very special guest brewer: Jarosław J. Łasiński, Consul General of the Republic of Poland in Los Angeles. Łasiński was joined by Polish Culture Consul Ignacy Żarski, as well as festival board member Krysta Close and her husband Kenneth.

“Mr. Łasiński joined us for a brew day and got his hands dirty,” said Evan Partridge, R&D brewhouse manager at The Propagator. “It says a lot about the Paderewski Festival that he would take such a special interest in this beer.”

The porter style—which is marked by a dark opaque color and rich malt character—originated in London in the early 18th century. Paderewski Porter is made in the “Baltic porter” style, which is differentiated from the classic English style.

Porters were originally exported to Eastern Europe from Britain by way of the Baltic Sea. The porter style proved to be popular in the port cities, and later gained favor inland as well. In time, Polish and other Eastern European brewers put their own stamp on the style by using lager yeasts to brew the beer, resulting in a distinctive twist on a traditional porter.

True to form, Paderewski Porter is brewed with hops and malts exclusively from Germany and Eastern Europe, and is fermented with lager yeast to achieve a Baltic porter-style drinking experience.

“This beer is really smooth with a bit of milk chocolate character and less of the fruity notes you get from English porters,” Partridge said. “It’s a perfect beer to go with the fall season.”

Added Joel Peterson, Firestone Walker’s marketing manager and board member of the Paderewski Festival, “We are excited to bring a little extra flavor to this year’s festival, and to partner with Polish officials to pay homage to a true local legend.”