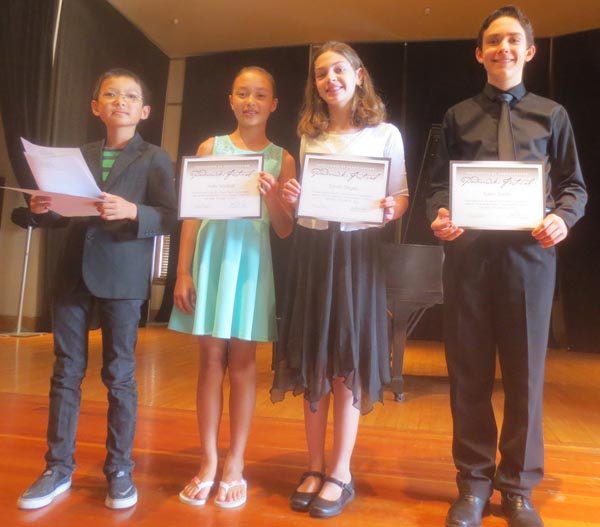 –The Board of Directors of the 2016 Paderewski Festival in Paso Robles have announced the winners of its annual Youth Piano Competition.

The auditions were held at the Park Ballroom in downtown Paso Robles on Saturday, Oct. 22. A total of sixteen competitors from four central California counties (San Luis Obispo, Monterey, Fresno and Santa Barbara) competed in two divisions: Juniors (aged 10-14) and Seniors (aged 15-18). The judges for the auditions included India D’Avignon and Paul Woodring—both faculty at CalPoly San Luis Obispo—and Marek Zebrowski, Artistic Director of the Paderewski Festival in Paso Robles and Director of the Polish Music Center at University of Southern California.

The 2016 Youth Competition Winners’ Recital will be held at the historic Ballroom of the Paso Robles Inn on Saturday, Nov. 5 at 4 p.m. The admission to this event is free and open to the public.

The top honors—First Place, Junior Division—were given this year to Talon Smith, a 14-year old piano student from Fresno. A student of Rufus Choi, Talon will perform Chopin’s Barcarolle, Op. 60 at the Winners’ Recital in Paso Robles on Saturday, Nov. 5. 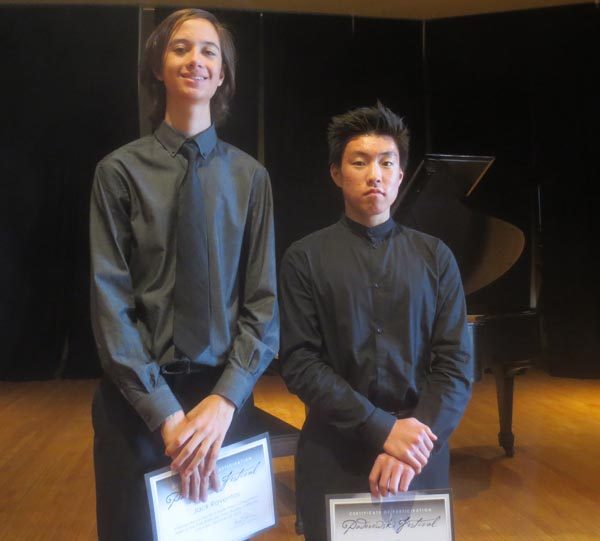 Holly Hadsall—an 11-year old from Santa Barbara who studies with Ms. Lana Bodnar—is the Second Place Junior Division winner. A 2014 and 2015 Competition finalist, she will perform Clementi’s Sonata Op. 26 at the Winners’ Recital.

Andy Cai Shen, a 10-year old from San Luis Obispo and a student at Bishop’s Peak Elementary School who also studies piano with Mr. Alan Boehmer. Andy is the recipient of the Paderewski Legacy Award and he will perform Mozart’s Fantasy in D minor at the Winners’ Recital.

The First Place winner in the Senior Division this year is Luke Kim, a 15-year old from Carpinteria. A 2015 Competition finalist and student at Cate School, Luke is studying piano with Dr. Egle Januleviciute. Besides piano, Luke also studies cello, and was a finalist in the 2015 Paderewski Youth Piano Competition. Luke will be heard performing Hindemith’s Sonata No. 2 and Paderewski’s Burlesque, Op. 14 at the Winners’ Recital.

The Second Place Senior Division winner is Jack Raventos, a 16-year old from San Luis Obispo. A 2012 and 2014 Competition finalist, Jack Raventos participated in the 2013 Cultural Exchange Program in Poland, administered jointly by the Paderewski Festival and the Province of Tarnów, Poland. Jack currently studies with Dr. Lynne Garrett and he will perform Chopin’s Nocturne Op. 27 no. 1 and Beethoven’s Sonata Op. 10 no. 3 at the Winners’ Recital.

The Youth Competition and the Cultural Exchange Program are part of the festival’s outreach into the community for talented young individuals in central California who want to pursue career in music. Fostered by the festival since 2008, this mission builds upon the idea of Ignacy Jan Paderewski who wanted to establish a music school in Paso Robles. The 2016 Youth Competition Winners’ Recital is sponsored by Tablas Creek Vineyard and Derby Wine Estates, with additional support from Paso Robles Rotary.

The 2016 Paderewski Festival will conclude on Sunday, Nov. 6, at 3 p.m. at Park Ballroom with a Paderewski Birthday Celebration featuring Maestro Greg Magie and Symphony of the Vines, with current and former Paderewski Festival Cultural Exchange Program students as solo guest artists. Daniel Ha and Kannan Freyaldenhoven from the Central Coast, Sasha Dzvinkovsky and Yulia Medynska from Ukraine, and Magdalena Kuropatwa from Poland will perform their own orchestral arrangements of American, Polish and Ukrainian folksongs. The symphony will perform music by Lutosławski and Beethoven’s Piano Concerto No. 5, featuring French soloist Brigitte Armenier. Individual tickets for this concert are available only through Symphony of the Vines.