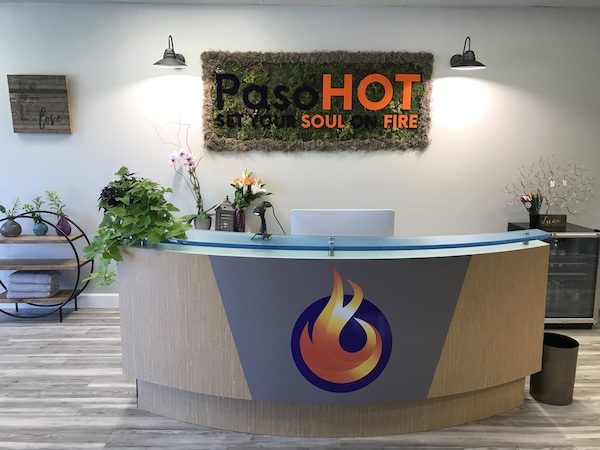 –Lanie Jean, owner and certified yoga instructor, is (more than) excited to have recently opened North County’s first Hot yoga Studio, in Paso Robles. The Paso Chamber of Commerce will be hosting a grand opening ribbon cutting is on Jan. 18 at 4:30 p.m., with a free class to follow at 5:30 p.m.

Originally from Ventura County, Jean first began practicing yoga in 2007 while training for the Los Angeles Marathon. Finding this not only transformed her body, but helped her mental focus as well, it became a long term goal of Jean’s to become a yoga professional, and eventually open a yoga studio, she says, but not just any yoga studio, a hot yoga studio. Studying, practicing and training, Lanie received her certification in hot yoga and Vinyasa yoga from the Evolation yoga studio in Summerland, California. Known for their worldwide training certification, Evolation was also recently named one of the 10 most beautiful yoga studios in America.

Knowing that “Hhot yoga” is not widely offered or understood, Jean briefly explains that “Bikram yoga is a specific sequence of 26 postures and two breathing exercises traditionally done in a 105 degree room, and 90 minutes in length.” Because this is a new concept in Paso Robles, Lanie has modified this sequence into a 60 minute class with the room at 100 degrees. One of the most important benefits of hot yoga as opposed to traditional yoga, is the detoxifying effects on the body.

Jean has six certified yoga instructors, having background is all forms of yoga including: Bikram, Vinyasa, Hatha, and Yin.

A variety of classes (not just hot yoga) are offered daily to fit your schedule, level of experience and personal goals. Currently there is a new member trial special: 7 consecutive days of unlimited classes for $39. What a great way to introduce yourself to the world of Yoga and Hot Yoga! In addition there is a $99 monthly membership, offering unlimited classes.