– Photographer Coral Kessler’s first public exhibition of “Deeries” – The Deer Series, will be held on Saturday, at The Bunker, located at 810 Orcutt Rd. in San Luis Obispo. 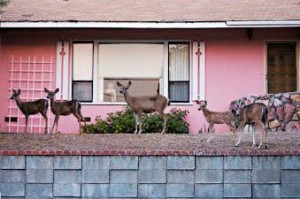 A photograph from the Deeries series.

Deeries is the result of two years chronicling wild deer populations on the Central Coast, with particular focus on the intersection of deer and civilization. Many Paso Robles residents may recognize their own neighborhoods or homes as backdrops for these photos.

Coral Kessler spent her entire life on the island of Kauai before moving to San Luis Obispo in her late twenties. Never having experienced living amongst deer, she quickly became fascinated with the animals. Moving to Paso Robles in 2013, she really got to know them – first out of frustration when they repeatedly destroyed her garden, and later as she began documenting them through her camera lens.

In her book, Kessler states: “I can’t help but be in awe of them- impressed with their bold resilience, and a bit confused by it too. For better or worse, the line between nature and neighborhood is indistinct and very blurry here.”

Posting her photo series online, she found an audience of thousands who shared her frustration and fascination with these wild creatures. The series, “forces us to consider whether it’s the deer or the suburban sprawl that remains out of place.”

The “Deeries” book will be available for purchase, as well as prints and other merchandise. Refreshments will be provided.