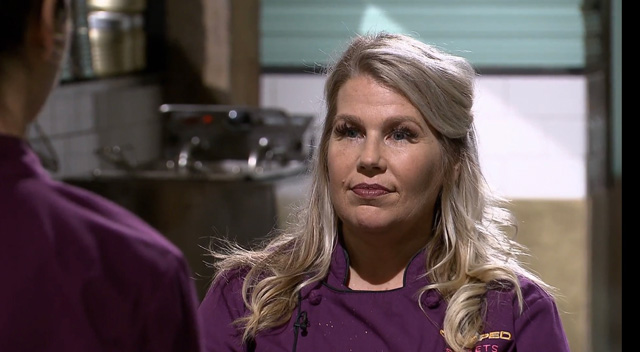 The show is a spinoff of the popular culinary competition “Chopped.” TV host Scott Conant challenges four pastry artists to demonstrate their skills and imagination to win a $10,000 prize. The competitors had three rounds showcasing different baking techniques: candied, baked, and frosted.

Round 1 basket: Giant ring pop, honeydew, silver leaf, and a mosaic gelatin mold. Ryan made churros with a honeydew/lemon curd coulis topped with silver leaf and a dollop of nitrogen-blasted mosaic gelatin and mango chattily.

Round 2 basket: Grapefruit, candied apple, cinnamon schnapps, and geode cookies. Ryan made a schnapps-spiked Paris-Brest filled with grapefruit whipped cream on an apple geode cookie and schnapps compote with a geode-cookie sprinkle.

Her delectable creations earned her a second-place finish. 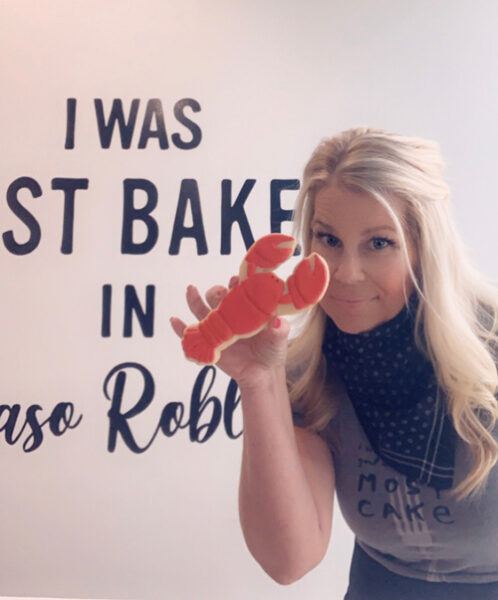 “I am a self-taught baker who went up against classically trained pastry chefs,” says Ryan. “That in itself makes me proud of my performance! My only hope was that I did not go home first. I am super proud of myself and had such a great time filming that I would definitely do it again.”

“I began my business on my son’s 10th birthday, accidentally. As a single parent I could not afford the cake that he had asked for on his birthday – I YouTubed a tutorial and posted his cake on Facebook and that is how my business started,” she says. “My friend Annie was the owner of Just Baked and she had to move unexpectedly and asked if I would like to purchase her bakery. I had been a licensed home baker for seven years and took the leap to the brick and mortar merging her business and mine together in Santa Margarita… Fast forward and here we are in Paso, opening August 1, 2020.”

Just Baked Cake Studio and Bakery specializes in “all things pastry,” Ryan says. “We are probably best known for our cakes, macarons and cookies,” she says. The bakery is located at the Paso Market Walk at 1803 Spring St., Paso Robles, Calif.