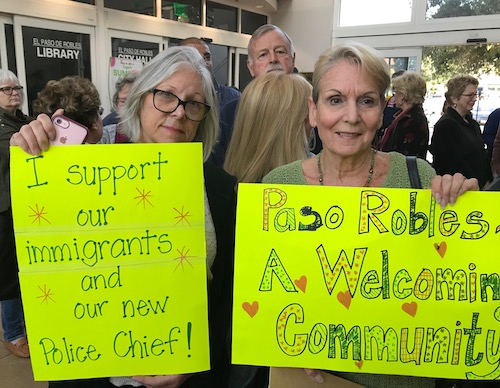 —At the Paso Robles City Council meeting on May 1, council members unanimously voted to take no action concerning SB 54 after hearing comments from the community during the meeting and previously on Apr. 17. Over 70 community members spoke to the council in support and opposition of SB 54, and citizens stood in the library lobby due to overcrowding in the chambers.

The city council decided to write a letter to state officials and the governor detailing flaws and proposed fixes to SB 54 in addition to the ‘no action’ vote.

Below are community members quotes from their speech at the Apr. 17 meeting, May 1 meeting, or from their submissions.

“I waited in line and finally got in and spoke at about 8:20 p.m. The public sentiment was overwhelmingly in favor of remaining neutral or supportive of SB 54. There were two notable reactionaries who pandered fear of “the other”. All of the rest supported their community and their police department. I was proud of my little town.” – Ben Miller

“A lot of our agriculture stuff is mechanized. They’re not needed as much in agriculture as they had been before. I’ve worked in the agriculture industry where I’ve had farmers come and say they couldn’t get people to come and work because they go down to LA to wash dishes. That’s jobs our kids used to do. So what are we going to do? Are all of our kids going to go to college and what are the kids going to do after they go to college? I understand people that come here and got educated and became doctors and nurses. Why can’t they become doctors and nurses in their own country?” – Jeff Horton

“It was amazing. 66 people spoke for the council to do nothing (in support of SB 54), and only 12 spoke against what is good and right. It was very emotional. While there were quite a few very clear racists and a couple skin heads, the overwhelming amount of people up here in scary Paso spoke of goodness and inclusiveness. It really was something to see. The vote was for doing nothing… except they are going to have their staff (city staff) come up with a list of flaws in SB 54 to send to the California powers that be. Pretty sure that was just to appease the haters. But anyway, we won!!!” – Deborah Scarborough

“In our wonderful town of Paso Robles, all we have to do is look to see the impacts of no consequence illegal immigration in our beautiful little city, no matter what that report says gentlemen, crime, graffiti, gang violence exists. Overcrowding in our schools exist. The use of Twin Cities Community Hospital Emergency Room as a no cost general care facility is impacting the little town of Paso Robles, gentlemen.” – Tom Flynn Jr.

“Congratulations to everyone who played a role. I listened from SLO on KPRL. Aaron Cantrell, Robert Skinner, I’m proud to be a colleague at PRHS. Students Fatima, Diana, Mason, Jeraly, Eddie, thank you for your courage to speak truth to power. Tim and Matt, wonderful demonstration of what it means to be an ally. One by one, community members from far and wide shared their appreciation of diversity, their proud immigrant past, their personal and positive experience with the newest immigrants to Paso Robles. Last night was exactly the antidote for the xenophobic fear mongering of the previous Council meeting. Let’s continue the conversation.” – Geoffrey Land

“The bottom line here is with the advent of AB 109, Proposition 47, and a variety of other things that have happened in the state, what its done is its handcuffed our law enforcement officials from doing just that – protecting and defending the people of this city. We’re going to find out very soon where each one of you stand as it relates to this issue. This is the most important issue that the City of Paso Robles, we had over a million visitors here and I assure you there was some bad people. We’ve produced them ourselves as citizens but there’s a lot of them who are here illegally and we are hamstringing our police force and we’re putting our citizens at risk.” – Michael Rivera

“It was truly amazing to see the turnout! I was there two weeks ago and the tenor of the meeting was truly scary with many racist comments. The different tone this time began with Tim Gearhart and the three other Paso Robles Public Schools trustees who came and spoke about immigrants and the contributions by all of us who are part of a family of immigrants. It was also interesting to see Fred Strong switch his position on having ICE establish a facility in Paso Robles!” – Richard Beitez

“The fears around SB 54 are about criminal felons that are being released, not the average person that is living in Paso Robles. So those here that are illegally here that are supposed to be deported after their incarceration are the people we’re talking about, not law-abiding people…This isn’t just about San Luis Obispo County, the issue is a state-wide issue… I ask that the council does write a letter against SB 54 and keep the criminal element out of our community.” – Sheila Healey