–Verify First Technologies of Paso Robles recently announced it has successfully completed the development of a ballot security technology that prevents fraud related to counterfeit ballots.

The technology, trademarked SCANcheck, works on the premise of embedding encrypted microstructures within a security seal printed on the ballot. The microstructures are coded to identify election specific information related to the county or jurisdiction. With the SCANcheck technology, an election official can easily identify ballot authenticity. 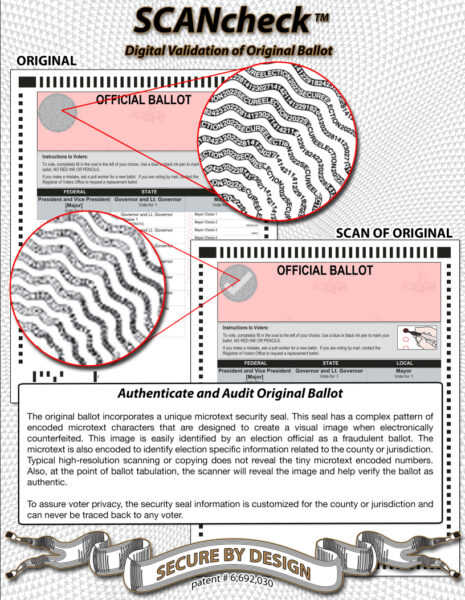 Example of SCANcheck security measures. Click the image to enlarge.

“Due to the lack of voter confidence in our election processes, we recognized a need for strong visual security to protect paper ballots, says CEO George Phillips. “Each year our election printing division, ProVoteSolutions, prints millions of ballots for 32 counties; one of them being the largest in the US.”

“The states control every aspect related to the printing and mailing of the ballots to ensure integrity in the election process,” Phillips says. “In California, each ballot producer is certified under strict protocols and their manufacturing plants are inspected for any security-related or quality policy issues on a regular basis. This inspection includes both the physical manufacturing plant and data-related security policies.”

“Up until the 2000 and then the 2016 elections, generally speaking, our country has not been overly concerned about election fraud. With the 2000 hanging chad ballot debacle, Dan Rather, and other news media organizations, investigated the ballot printing manufacturer to see if there was some way the manufacturer could manipulate the punch holes so the ballots might have favored President Bush. In 2016 many in the news media thought that Russia had somehow manipulated the election process to favor President Trump. Today the public, more than ever, believes widespread voter fraud may be rampant in our system.”

“To fully protect the identity of the voter, we are left with a system that does not allow for ballot chain of custody which makes it almost impossible to fully protect the election process against some fraud. While there is no silver bullet there are methods of layering security technologies to protect and improve the overall election processes.” 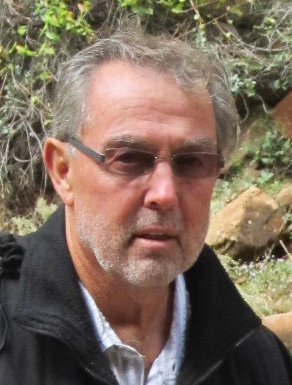 “The new SCANcheck™ technology layer is perfect for identifying an authentic ballot that has not been counterfeited or a fake ballot that is a counterfeit. We believe that by adding a strong visual security feature to the ballot it will enhance ballot integrity and much improve voter confidence.”

As a new technology, it must be approved by states that want to certify it and enhance their ballot security, Phillips says. “Since it is just being introduced and given the complexity of how long it will take for our government to vet and implement we do not anticipate early adoption until at the earliest the middle of 2021.”

Verify First Technologies, Inc. is a company under the umbrella of Pro Document Solutions at 1760 Commerce Way in Paso Robles. The company says it has more document security-related patents issued than any other entity in the world.

Verify First Technologies, Inc. (VFT), along with its sister companies, ProDocumentSolutions, Inc. (Pro), ProVoteSolutions (ProVote), and International Security Products, Inc. (ISP), is a world leader in the development and patenting of effective anti-fraud solutions. Established in 1994, VFT provides numerous security solutions to entities and governments in over 22 countries through its two security printing facilities located in California. VFT has been awarded 18 security patents. Pro has been recognized for its security contributions having been honored as Grand Winner PSDA Document Security Peak Awards for nine consecutive years.