Well, to the few of you out there that actually read this every week I’m sure you noticed I didn’t have an update and review for you this past week. I had family in town from Tennessee and spent the week traveling the coast. Highlight of the week was getting to meet the one and only Bruce Campbell at the Castro Theater in San Francisco. Unfortunately the meet and greet was short lived; I could have sat and talked with him all night. In our brief talk he did assure me that fans of the original “Evil Dead” movies are going to love what they have done with the remake coming  out in April.  While I have been on the go I did manage to get to Park Cinemas this week which leads me into my review for this week.

The Park Cinemas Picture of the Week: “A Good Day to Die Hard” (R) 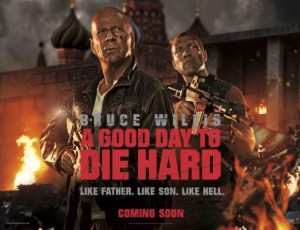 John McClane (Bruce Willis) really needs to stop trying to take vacations. He  is back at it again in the newest Die Hard installment “A Good Day to Die Hard” and once again things don’t go as planned thanks to some foreign terrorists. This time around John McClane is in Russia to reconnect with his son and try to help him out. His son, Jack (Jai Courtney), is following in his footsteps and is fighting crime as an undercover CIA agent. I don’t want to give too many details away, but as usual things aren’t as they seem. While things don’t go as planned, there’s nothing like some good old father and son bonding while killing some bad guys. This was one of the most action packed Die Hard movies to date. It will have you riding your seat like an American Cowboy yelling out Yippie-Kay-Yay! That being said, as far as Die Hard movies go is not one of the better ones. Enjoyed it more than “Die Hard 2”, but “Die Hard” and “Die Hard: With a Vengeance” are easily the best out of the series. If you’re looking for a great Die Hard movie you may be disappointed, but if you’re just looking for a good action movie then you’ll enjoy the hell out of “A Good Day to Die Hard”.

Playing at The Palm:

If you love all the mistaken identities, plot twists, and silliness of Ken Ludwig’s “Lend Me a Tenor”, then you’ll love his newest farce! This hilarious romp begins at Quail Valley Country Club as they prepare to take on arch rival Crouching Squirrel in the Annual Inter-Club Golf Tournament. Join us for a charming, madcap adventure about love, life, and man’s eternal love affair with outrageous sweaters and…golf. (Rated PG)

From the creative minds behind My Generation andThis is Rock ‘n’ Roll: The Alan Freed Story comes a new original musical about politics and greed, featuring the greatest musical hits of the 1970’s. Watergate and Other Solid Gold Hits follows the rise of a driven political player as he navigates and inspires some of the most infamous headlines of the decade. Join us on the journey from Flower Power to leisure suits as a groovin’ live band, slick singers, and sultry dancers fill the halls of the Capitol with incredible music from one of the most scandalous decades in American history.

Spanish guitar master Peña teams with sizzling dancers for Flamenco Vivo! – a driving evening celebrating the dazzling art form and the passionate music that brings it to life.

The University Singers and PolyPhonics will perform an evening of music with a theme influenced by the beauty and power of water. Special guests will be the Cuesta College Chamber Singers conducted by John Knutson.

MET Live in HD: Verdi’s Un Ballo in Maschera in the Christopher Cohan Center on February 24th at 2:00 PM

Director David Alden’s dreamlike setting provides a compelling backdrop for this dramatic story of jealousy and vengeance. Marcelo Álvarez stars as the conflicted king; Karita Mattila is Amelia, the object of his secret passion; and Dmitri Hvorostovsky is her suspicious husband. Kathleen Kim is the page Oscar, and Stephanie Blythe sings the role of the fortune-teller Ulrica. Fabio Luisi conducts.

Clark Center for the Performing Arts:

SUPERCHARGING THE EDUCATION PROFESSION BY IGNITING THE POWER OF ONE
February 20th at 7:00 PM
Presented by Cal Poly’s College of Liberal Arts and the School of Education

The Clark Center for the Performing Arts will host an evening presentation by Rebecca Mieliwocki, the 2012 National Teacher of the Year. Rebecca is a 7th grade English teacher at Luther Burbank Middle School, which houses 1100 students in grades 6-8. She has been teaching for 14 years and has spent 9 years in her current position. She is the 2005 California League of Middle Schools Educator of the Year for Southern California, a 2009 PTA Honorary Service Award Winner, and a BTSA mentor, and has also served as a teacher expert for CSUN College of Education Panel titled “The ABC’s of IEPs.” Ms. Mieliwocki’s presentation begins at 7:00 p.m. followed by a Q&A. For more info, visit the School of Education’s website (www.soe.calpoly.edu) or contact Megan Guise in the English department at 805-756-2134 or meguise@calpoly.edu.

PARENT’S NIGHT OUT
February 22nd at 7:00 PM
Presented by the Clark Center Association

Parent’s Night Out is a chance to laugh at the trials of everyday life, family, marriage and parenthood. The show is an instant audience favorite, delighting theatre audiences around the country. Karen Morgan, a Southern belle, and Jim Colliton, a Boston Irishman, are both comedy veterans. They are also parents who are married – just not to each other – so they bring you both sides of the story. Through standup comedy, improv and hilarious audience participation, Jim and Karen give parents of all ages a chance to laugh at the trials and tribulations of parenthood, marriage, family and everyday life in America. Parents Night Out is clean “comedy for grownups.” As a special bonus, the Clark Center is providing a free movie night for kids in our Studio Theatre during the Show, so you can experience a real “Parent’s Night Out!” Space is limited, so reserve now!

ALL HANDS ON DECK!
February 24th at 3:00 PM
Presented by the Clark Center Association

All singing! All dancing! All Big Band! All Hands on Deck! is a new, two-act revue featuring the
songs, dances and laughs that America has loved since the 40’s. All Hands on Deck! includes over 40 classic Big Band hits, all packaged in a fun-filled true-to-life reproduction of the kind of USO show Bob Hope & Jack Benny would have taken to the troops: classic humor and great music. Songs include “Chattanooga Choo-Choo,” “I’m In The Mood For Love,” “Pennsylvania Polka,” “I’ll Never Smile Again,” “Don’t Fence Me In,” “America The Beautiful,” “Deep in the Heart of Texas,” “Thanks for the Memory” and a powerful Military Medley. All Hands on Deck! is the perfect way to step back into 1942 and pay tribute to both active duty and veteran members of our armed forces.

The Orwells at SLO Brewing Company at 8:00 PM

Del the Funky Homosapien at SLO Brewing Company at 8:00 PM

Daniel Whittington at The Cliffs in Pismo Beach at 6:00 PM
Tyrone Wells at SLO Brewing Company at 7:30 PM

Chi McClean and Steve Key at Sculpterra Winerty at 3:00 PM
Benefit Concert for Miss Lilly Bumpus at The Ranch in San Miguel starting at Noon and going until 10:3o PM.