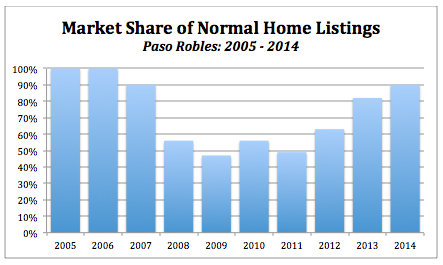 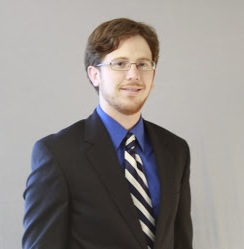 The puncture of the real estate bubble hit Paso Robles harder than most places in San Luis Obispo County. As the housing market has worked through recovery, Paso Robles has also seen one of the sharpest phases of growth.

From peak in 2006 through valley in 2011, the median home price in Paso Robles plummeted nearly 41%, from $490,000 to $290,000, according to Keith Byrd, a San Luis Obispo County-based multiple-listing service (MLS) statistics aggregator.

“The bottom was 2010 and 2011,” said Suzi Bussacco, a Realtor with Re/Max Parkside Real Estate in Paso Robles.

Through the first three months of 2014, normal listings have reached a 90% share, with foreclosures accounting for just 6%.*

RealtyTrac, an online foreclosure tracker, estimates that through February of 2014, 145 properties in Paso Robles were in some stage of foreclosure, which includes defaults, auctions, and bank repossessions. The number of foreclosure filings have dropped 10% from the previous year.

“The market is changing,” said Bussacco. “We don’t have many distressed properties left, but there are still some that nobody knows about because they are being absorbed differently.”

Bussacco explained that the remaining distressed properties are more frequently going up for bank-controlled auction. Though total foreclosure activity is down 10%, auctions (14.3%) and pre-foreclosure notices (12.5%) have jumped year-over-year, according to RealtyTrac.

Foreclosure activity is an important measure for real estate market stability. REO properties are much cheaper; the median REO listing in Paso Robles was 27% lower than normal listings through March of 2014, according to Byrd.

When a housing market becomes saturated by discounted foreclosures and short sales, property valuations may also be dragged down, causing existing owners to lose chunks of equity.

As local and national economies have reached a modicum of stable post-recession growth, fewer people are losing their homes to foreclosure.

Total real estate purchase activity has slowed in 2014. Through mid-April, Mortgage rates were 28.6% higher year-over-year, according to Freddie Mac’s weekly survey of lenders. In Paso Robles, the median listing price of $375,000 through March for all single-family homes was 8.7% higher than the previous year.

*Note: Bussacco pointed out that today it is more and more common to see distressed properties exclusively listed by online sites like www.auction.com and www.zillow.com rather than on the more traditional multiple listing services (MLS). Byrd’s data is drawn from MLS, and so doesn’t include the entirety of distressed activity.

Rylan Stewart is Marketing Director for Central Coast Lending, a mortgage lender based in San Luis Obispo County. Contact Rylan at (805) 235.6826 or rylan@CentralCoastLending.com. To learn about borrowing guidelines for home buyers after foreclosure, short sale, or other major negative credit event click here.