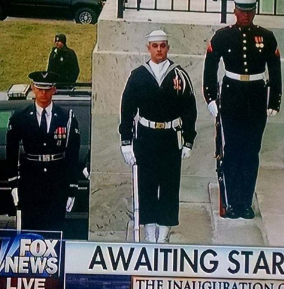 Micahal is a member of the Navy Ceremonial Guard Drill Team and comes from a proud military family with generations that served in both the Navy and Air Force.

Micahal says this is the most high-profile ceremony he has ever done.

Some of his other duties have included standing guard for arrivals at the White House for foreign dignitaries (including the president of China) and attending funerals at Arlington Cemetery.

Micahal attended Winfred Pifer Elementary and Lewis Middle School before graduating from PRHS. He said “this is definitely the most high-profile ceremony I’ve done and it’s going to be one of the most memorable.” He also adds, “It wouldn’t have mattered who the president-elect was, it would still be one for the books.”