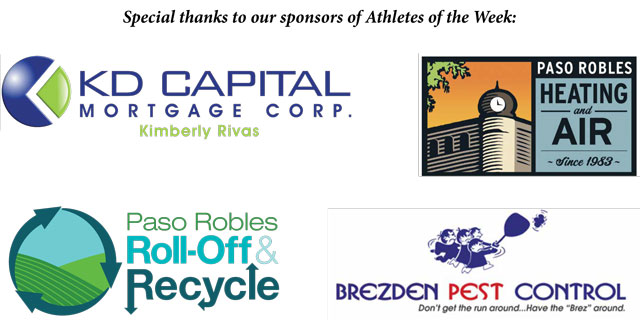 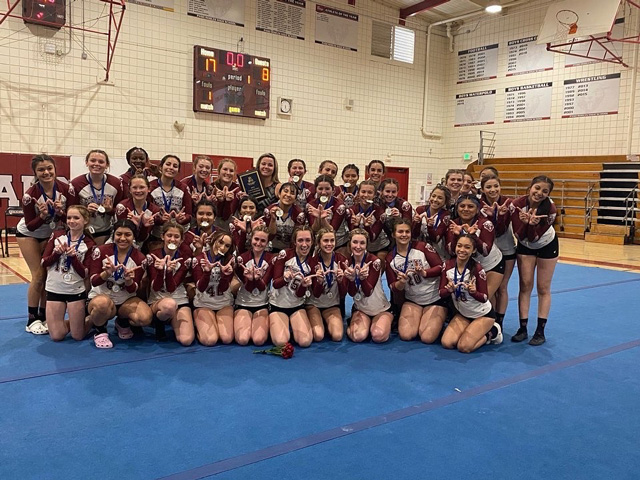 Coach’s comment: For this week’s Athletes of the Week I nominate my entire Stunt Team.

This year’s team consists of 38 Bearcats, seven of whom are seniors, nine are juniors, 16 are sophomores, and 6 are freshmen. This varsity sport has been at Paso Robles High School for six years. Five out of those six years, the Bearcats have won the Mountain League title. It would have been six years, but 2020 threw us a small wrench in our spring season.

In 2019, the PRHS stunt team represented the CIF Central Section at the State Tournament in Sacramento for the first time. They lost that year in the first round but vowed to be back.

In 2020, they had one of the strongest teams ever and played and won two games prior to being shut down by the global pandemic.

In 2021, they had an abbreviated season and although they went undefeated in the Mountain League, there was no CIF tournament or State Tournament to attend.

2022 came around and the Bearcats had a big task ahead of them. They set a goal for another undefeated season and a fifth straight league title. Another goal was to expand into the Central Section. Now that Tulare, Fresno, and some other Central Section teams were fielding stunt teams, a sectional tournament could be held and another title was up for grabs. The Bearcats worked literally morning and afternoon to get ready for the season. They not only attended a first-period cheer/stunt class, but they also practiced after school five days a week.

The first league game of the season came in early in February and the Bearcats were up against their program rival, the Arroyo Grande Eagles. A win against AG would almost certainly award the Bearcats the title of Mountain League Champions. The Bearcats were victorious against the Eagles!!! Now they just had to keep improving throughout the season, knowing AG would appear again in the Central Section tournament.

The stunt team faced off against Madera High School in the first round, defeating the young team easily. Next in the semi-final round, it was a rivalry game between the Bearcats and the Greyhounds. The Paso Stunt team dominated in the semi-finals, beating Atascadero for the third time this season. Now facing off in the final tournament contest were Arroyo Grande and Paso Robles. Paso had not lost to Arroyo Grande since its inaugural year of stunt in 2017. The Bearcats came into the game focused and ready for a big win. The team played smart and kept their skills strong through four quarters of play. In the end, the Bearcats defeated the Eagles for a second time that season 17-8. The team was overcome with pride as they clinched the first-ever Central Section title in both school and section history!

With the win over Arroyo Grande still vivid in their minds, the Bearcats prepared to represent the Central Section at the State tournament in Roseville, CA. They left only five days after winning the section title to travel to Woodcreek High School where the tournament was being held. In the state tournament, only one team from each section is allowed to participate and represent their area (Southern section and Northern section are larger so they are allowed two representatives). Only nine teams in the entire state make it to the state level and the Bearcats were one of them.

Going into the first day of the tournament, the Bearcats were confident they could pull out a win but it was going to be a tough battle. They were seeded #7 and going up against the large powerhouse team of the San Joaquin Section, Oak Ridge High School. The Bearcats came out strong and confident. They relied heavily on their attention to detail and synchronization in their lower-level routines to slowly chip away at a point deficit they had gotten themselves into during the first three quarters of the game. During the fourth quarter of play, they managed a crazy comeback to tie with Oak Ridge in the final routine of quarter 4. The Bearcat bench went crazy! The fans in the stand and fans watching online at home went just as crazy!! The excitement in the gym was so very palpable. Entering into overtime, the Bearcats were confident in their skills and played their best multi-routine level 1 of the entire year. When the results were called out, they had won all three points in that round with Oak Ridge winning only one point. The Bearcats were advancing to the semi-finals after winning 13-15 in OT.

On day two of the tournament, the Bearcats were up against Murrieta Valley from Southern California. The game was a battle the entire time but the team fell to the Hawks 15-7. It was a tough loss after such an amazing win the day before but the Bearcats from Paso Robles had made school history by becoming a semi-finalist at the state tournament.

Overall it was an amazing season full of struggle and challenges overcome. The team is stronger for having learned the lessons of the season. Not all wins were easy but each victory brought us closer together and helped us see the potential of rising to the next level. 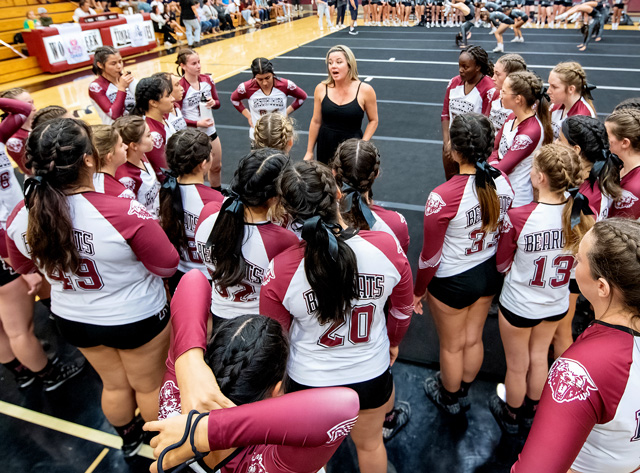 Thank you to the coaches for participating! All coaches at Paso Robles High School are invited to participate in Athletes of the Week to recognize students who are a standout at a recent competition, show improvement at practices, or bring a great attitude to the team. Contact scott@pasoroblesdailynews.com.

Thank you to our sponsors of athletes of the week:

Brezden Pest Control has been proudly providing SLO county with professional pest control services for four decades. If you’re tired of sharing your space with pests, they can help. They are homeowners, too – so they know exactly how satisfying it can be to have a pest-free home. 77 Marquita Ave, Paso Robles, CA 93446, brezdenpest.com, (805) 544-9446.

KD Capital Mortgage Corp. is committed to helping you find the right mortgage product for your needs. We understand that every borrower’s situation is different, and make the process of securing a mortgage simple and straightforward. We are with you every step of the way. As a broker, we work with multiple investors so we can shop for the best rate, terms, and service. 1305 Vine St. Paso Robles, CA 93446, www.kdcapmtg.com, (805) 550-8632.

Paso Robles Heating & Air is locally owned and operated and has been meeting the comfort needs of the community for years. They bring trusted solutions by installing and maintaining high-quality, high-efficiency heating & air conditioning systems that deliver years of dependable service. Ask about the benefits you can receive by being a member of their Fan Club! 1142 Railroad St.,
Paso Robles, CA 93446, www.pasoroblesheating.com, (805) 238-7553.