–The Paso Robles Bearcats (1-1) bounced back after a season-opening loss to St. Joseph to beat San Luis Obispo 29-22. The Tigers jumped out to a 22-7 lead on their home field in the first half, but the Bearcat coaching staff made some adjustments at halftime. The Bearcats outscored the Tigers 22-0 in the second half. The Bearcats improve to 1-1 in the Mountain Conference, 1-1 overall. They will travel to Santa Maria next Friday night to take on Righetti. Because of a COVID cancellation, the Warriors have yet to play a football game this delayed season.

The Eagles won the coin toss and deferred, so they kicked off to the Pirates to start the game. The Pirates drove downfield, but Parker Gouin intercepted a pass which ended the drive. The Eagles then drove downfield for their first touchdown.

The Eagles repeatedly stopped the Pirates’ run offense, and Pirates quarterback Kevin Franco did not have success throwing the ball downfield. He had two interceptions in the game. 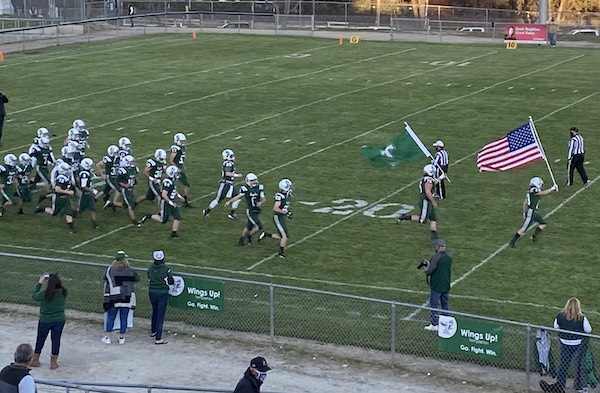 Eagles running back Josh Berna ran well against the Pirates. He scored three touchdowns and ran for over 150 yards. Chase Richards, Mason Barbour, and Anthony Fischer controlled the line of scrimmage and disrupted the Pirate offense.

The Eagles scored evenly in the first three quarters. They put up 13, 15, 14 points in each quarter, then Coach Don Crow cleared his benches in the 4th quarter. The Eagles improve to 2-0 for the season, 1-0 in conference. They will host Arroyo Grande (1-1) next Friday night. The Eagles are ranked 3rd in the Central Section Division 4, behind Washington Union and Selma.

The Atascadero Greyhounds (0-2) also played in San Luis Obispo Friday night. They lost to the Mission Prep Royals 56-6. The Royals led 42-0 at halftime, and then coasted in the second half. The Greyhounds did not score until the 4th quarter. The Greyhounds will play next Friday at Santa Maria (1-0.)

Paso Robles girls softball won their second game of the season Wednesday afternoon, beating the visiting Morro Bay pirates by the score of nine to three. Hannah Chambers pitched five scoreless innings for the Bearcats in her season debut earning her first win of the season. Brooklyn Pesenti came in to pitch the 6th and 7th innings to earn the save.

Offensively the Bearcats were led by Andie Dizon, Stacey Ruiz, and Hannah Chambers. Andie had two hits on the day with an RBI double in the first inning and a towering solo homerun in the 5th. Stacey Ruiz had a 2 RBI double in the 4th inning and continues to impress. Hannah Chambers also had a good day at the plate. Hannah went two for three with a triple in the 4th inning which knocked in two runs. The Bearcats are on the road Saturday and visit Mission Prep for a doubleheader in San Luis. Games will be livestreamed on VOP.