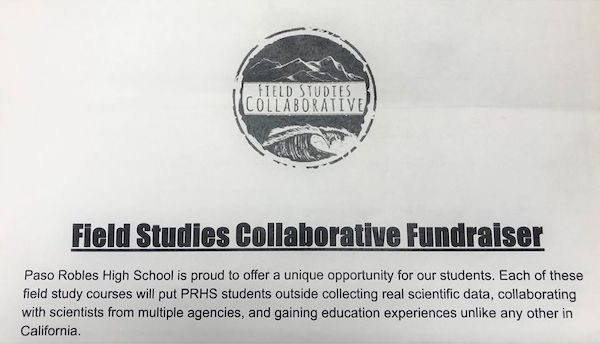 –Last week, a Paso Robles Police Department officer attempted a traffic stop on a car near the high school, but the driver fled and ditched the car in the driveway of a house. The 17-year old suspect attempted to hide behind a travel trailer in the same driveway, but he was quickly found and arrested.

A search of the vehicle revealed a manila envelope containing forged documents asking for donations for a high school fundraiser. PRPD was also contacted by SLO Sheriff’s Office that the suspect had collected donations in SLO as well.

The photo above depicts the actual form the suspect was presenting, a cut-n-paste job from the PRHS Field Studies Collaborative website.

• The PRHS has a no door-to-door donation-only policy
• Any school fundraisers must be approved by the district
• If you ever question the validity of a fundraiser, contact the school or the PD

If you were scammed by this young man, please contact the police department. Unfortunately, he did not have any proceeds with him during the time of arrest, police say.